Is shark diving beneficial for the sharks?

With the recent coverage of the cage diving accident at Guadalupe, a lot of people have commented that shark diving should be banned. 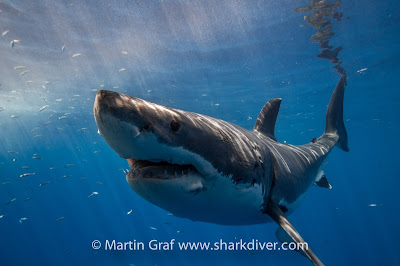 Obviously my view on that may be biased, since I own a shark diving business, but I have some facts that may change your view on shark diving. 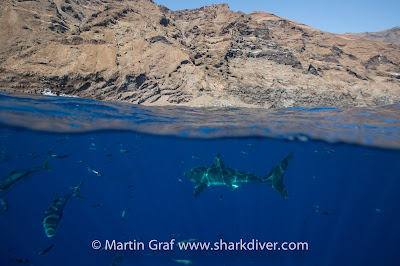 Did you know that shark diving created a National Marine Park in Fiji? The efforts of Beqa Adventure Divers, have directly led to the creation of the Shark Reef Marine Reserve. When they started diving there, they went to the local fishing village that were the traditional owners of that reef and made a deal with them. They would receive a levy from every shark diver in return for a promise from the village to not fish on that reef. Beqa Adventure Divers also hired and trained their Divemasters, Instructors and boat Captains from that village. After 10 years of diving there, the number of fish species on the reef increased from around 280 to over 480. In 2014 that reef became an official National Marine Park, the equivalent of a National Park in the US.

Did you know that Shark Diver donates a significant portion of it's proceeds to research? We primarily support the Marine Conservation Science Institute who created and maintains the photo ID database of all the sharks at Guadalupe Island.

Did you know that Shark Diver started Shark Free Marinas?

Shark Diver is just one company among many operators who actively uses the business to support conservation. We try to emulate our buddies in Fiji. Beqa Adventure Divers who state that they are a "Conservation project, masquerading as a dive operation" We have a long way to go, but we are working on catching up.

So how about the issue of conditioning the sharks, by providing them with food? I leave the answer to that question to DaShark who wrote a blog about that issue a while back.

He writes:
Conditioning via Positive Reinforcement, the big no-no.
Yes, I confess, this is precisely what we do!
We reward the Sharks whenever they approach, very much in the hopes that over time, more and more of them will turn up for a meal - which of course, being smart Apex Predators, they do!
We do so in order to show them to our clients - as opposed to, as I shall never tire to repeat, Fishermen who do exactly the same thing in order to catch and then kill them.
Get the hint? Who has the way biggest, and most negative impact on the animals? Are we going to abolish fishing as a consequence? I wish!

Just to remind you, this comes from the guy who was largely responsible for creating that national marine park I mentioned above.

There are many, many more reasons I could list that show that shark diving, when done properly can greatly benefit not only the sharks, but the ocean in general. It is easy to just oppose shark diving with often unsubstantiated claims, without taking into consideration what the alternative would be.

How many of you would be interested in sharks, or aware of them, without all the pictures and videos on TV and social media? None of those would be around, if not for shark diving? 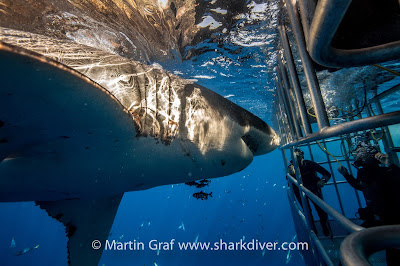 Weather you agree with my stand on shark diving or not, let's agree on something. Just offering our opinions on social media and criticizing others is not saving a single shark. Only actions can do that. Let's be activists, not slacktivists and keep in mind who is killing sharks. It's the fishing industry, not shark divers!

About Shark Diver. As a global leader in commercial shark diving and conservation initiatives Shark Diver has spent the past decade engaged for sharks around the world. Our blog highlights all aspects of both of these dynamic and shifting worlds. You can reach us directly at staff@sharkdiver.com.
Posted by Shark Diver at 10:55 AM No comments:

A lot of you have seen the news coverage of 2 recent cage diving incidents and are wondering, "Is cage diving really safe?"

First of all I want to point out that neither of these incidents happened involved our company. We have been operating safe and sane shark dives for 16 years, without any incidents.

In the latest video you can see that the shark is going after a hang bait that is just laying in front of the cage. This is mistake by the bait handler. The bait was too close to the cage and should have been removed. Excerpt from the regulations for Guadalupe: The permit holder shall ensure that the bait line is immediately removed from the water if the white shark following the bait approaches within 6.5 feet (2 m) of the vessel.

When the shark was going after a bait, it rolled it's eyes back and lunged for the bait. When it did that, it was essentially blind and it's momentum carried it into the cage. Since it can't swim backwards, it just started thrashing around blindly, eventually coming out of the top of the cage.

There is nothing wrong with using hang-baits. Responsible use of hang-baits actually enhances safety, as it allows us to direct the shark. The shark typically follows the bait and when it lunges for it, the follow through is in the same direction. Proper use allows us to lead the shark parallel to the cage instead of into it, as happened in the video above.

You don't have to have the bait close to the cage to get great shots. 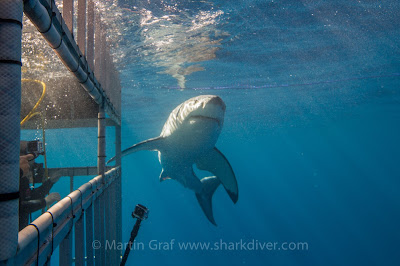 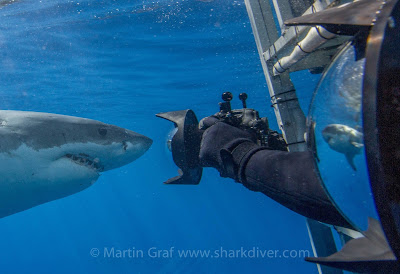 In addition to adhering to all the established safety standards, our cages are made out of round tubing which is both stronger than the square one and safer for the sharks, since it doesn't have any sharp corners. We also only use surface cages with a redundant air supply, that are securely attached to our vessel.

Back to the general safety question. While nothing is ever 100% safe, so far in innumerable cage dives around the world, there have been zero fatalities, which is to say, it is far safer than recreational SCUBA diving.

About Shark Diver. As a global leader in commercial shark diving and conservation initiatives Shark Diver has spent the past decade engaged for sharks around the world. Our blog highlights all aspects of both of these dynamic and shifting worlds. You can reach us directly at staff@sharkdiver.com.
Posted by Shark Diver at 10:51 AM 2 comments: