When you own your own submarine, life at depth can be pretty sweet:

Pilot is Karl Stanley of Roatan Institute for Deep-sea Exploration. 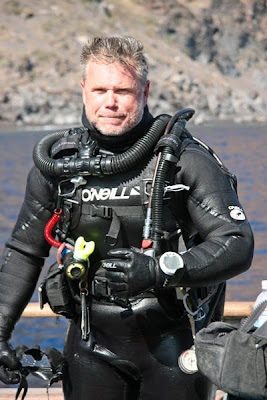 One of the more interesting members of the conservation/film and television community is, without a doubt, Scott Cassell.

rECOn changes the way the public views conservation initiatives by documenting and then putting in jail poachers in regions where enforcement is non existent.

This is boots on the ground enforcement to effect conservation change.

Scott just got back from Baja with this after action report from his team.

What they discovered in Baja shocked them and will shock you as well.

Weeks ago Dale had a tip that somewhere near the city dump was a pile of shark heads. Intrigued we searched around and in short order we found what we were looking for. Frankly, none of us were ready for what we would find.

The first few shark heads we found were tiny. Barely 2.5 inches across indicating the (Silky) sharks were only 10 inches to one foot long. These were just babies! We found 27 heads (20 silky, three hammerhead and four dogfish) and were disgusted with the cowardly act of slaughtering baby sharks for the export of their tiny fins to the Asian markets and the tiny fillets being sold at the local markets.

We decided to lay them all out in neat rows to film them and as I maneuvered to make the line straight my foot slipped into a burn pile opening up the charred surface exposing underneath. Dozens of tiny shark heads showed through... and as Dale, xxx and I looked around with our eyes calibrated to what to look for we began to realize what was all around us. We found an old plastic box-crate and began loading it up with all of the tiny shark heads and the deeper we dug the more we found... then I found the worst of it. A huge pile of of horse shit covered hundreds of baby shark heads.

I love sharks. I love sharks like many folks love dogs and cats. For years I have hand fed and admired sharks. I have tagged them, saved them for net entanglement, and reached out and touched ‘one ton’ white sharks and tigers as they swim by in their full majesty... and my life is greatly enriched because of these unique encounters.

To discover over one thousand disembodied heads of babies in a dump covered in horse shit was almost too much to endure. All of this suffering for sushi and shark-fin soup.

XXX found the heart to keep filming and despite his own emotions... he kept asking me to talk to the camera in order to record my reactions to this display of ‘humanity’. I found myself on the verge of tears as I dug out tiny lifeless heads of shark pups with their vacant eyes staring into man’s world of trash. The anger welling up inside of me had to be focused as I inhaled the dust composed of murdered babies, horse shit and human filth. This illustration of man’s complete lack of respect for the sea and indeed for life itself lowered my faith in Mexican fishermen and mankind overall.

This has special significance to us because the Totuaba were fished to near extinction and are now protected by Mexican law. Having a Totuaba in your possession regardless of how you obtained it is a mandatory 8 year prison sentence. So, if we can find out where the poachers fish the Totuaba we can find WHO they are and bust them.

XXX, Dale and I gathered at the tail gate of the truck and reflected for a moment on what we just found and I glanced across the dump at a strange shape propped-up on a rock. At first I thought it was just a piece of junk like a trash can lid... then I saw a familiar shape along the edge of it. “No Way!” I jumped up and set to look at it with a quick walk. What I thought was junk was a Green Sea Turtle shell with the center kicked in by a poachers boot-covered foot. What I did not know is that I had just found the best way to catch these sick bastards. Dale had a network of friends in the area and they know everything that goes on nearby. They know Sea Turtles are easy to poach.

The next morning we set out on Dale’s panga to the islands we selected to explore for Poaching activity. Upon arrival to Lobos Island we noticed the Sea Lions were afraid of human approach and scrambled off rocks at the sight of us. This behavior is learned, not instinctual. Here humans kill Sea Lions. As most Sea Lions scrambled into the water I noticed on was hesitant to leave her rock perch. We slowly worked our way closer to her and noticed she had a dark ring around her neck. I trained binoculars at her as XXX focused his camera’s long lens on her and we both saw she was gravely injured from a Poachers net fragment cutting through her skin, blubber and muscle into her throat. I took out my knife and asked Dale to close it so I might try to jump-tackle her and cut the net off... but she dove in at the last second closing the window of opportunity on her survival.

We left the island with heavy hearts.

Dale politely declined purchasing the dead Sea Turtle and chatted with them about weather, fishing, a cut on a fisherman’s hand and eventually left safely.

So: How much is a Sea Turtle worth? The Sea Turtle was offered to Dale for $100. We decided it would have sold for much less to a Mexican.

Upon his return we watched the film Dale captured and it was incredible! Now we needed to film them in the act of fishing for turtles and (thanks to Dale’s film) we knew exactly where and when to set up the surveillance. Almost on cue, a Poacher carries a huge net on his shoulder to the shoreline in complete darkness... all the while being filmed by XXX’s watchful eye (complete with night vision camera). Once the Poacher dropped the net Dale and I set out on the beach to get close up images of the net to be certain it is the kind used to kill Sea Turtles. Dale set up an over-watch position with an Electrophysics Thermal Camera and radio to keep me informed of Poacher movements, especially if he decided to return to the net while I was there filming it. I used my Sony Z-1 with an Electrophysics Night Vision 9350BRAC Module to film in the darkness like it was daytime. I worked my way out on the beach to the net in a low a profile to avoid detection while Dale looked out for me. XXX was filming us both from a higher more distant vantage point using his night vision module and long lens.

After some sneaking around I found the Poacher’s net and confirmed it was the kind used to kill Sea Turtles. A surge of anger rushed through me and I wanted to destroy the net and wrap it around the Poacher’s neck like the condemned female Sea Lion we saw earlier... but I stayed on the mission profile and departed the area. As soon as I found Dale’s over-watch position and joined him the Poacher was half-way to the net. I luckily missed the Poacher’s return by less than a minute! In my heart I felt it was more lucky for the Poacher than me we did not meet alone in the dark.

We silently filmed the Poacher deploy the net over the course of 45 minutes in the darkness. I felt good about the footage we caught but was seething inside about the innocent creatures this drug-hooked-miserable-excuse of a human was responsible for killing for a few pesos. He was not a man. He was a coward.

The next morning we all loaded Dale’s panga and we went around the point to where the Poacher’s net was set. Dale passed by the cove a few times in order to give me amble opportunity to get a compass course set with my TAC board. I finished putting the Ghuille cover on my O2 rebreather and I donned my new Riffe Cryptic Camo Wetsuit and combat dive gear and slipped into the water. On my TAC board was a HERO HD Camcorder facing me to record my actions during the dive and another was mounted on my helmet facing forward to record what I saw. I descended to 20 fsw and noticed how my body blended perfectly into the water thanks to the Riffe suit. I made a communications call to Dale and then followed my pre-determined course and counted kick strokes right up to the net (which was in full view of the Poacher’s campo... hence the need for stealth). The net was already indiscriminately killing fish while it waited for the illegal targets (Sea Turtle) to wander to close. I filmed the full length of the coward’s technology and called Dale to let him know I was safe and departing the net back to the boat. Once back onboard we left the site to set up another surveillance site to wait for the poachers to recover the net. They never came. Did they get tipped off to our operation? Were they just too high to care about getting their illegal catch out before it spoils? We may never know... but we did collect several nets and placed them into our little bonfire ring. It feels really good to destroy these nets and I hope it financially cripples these bastards so they find it harder to Poach.

Dale, XXX and I were lucky enough to meet with our ‘client’ in Baja as we headed back to the US. We showed him some of our evidence and explained in detail what we found. He was quiet at first... then he offered us some insight to his vast wisdom and experience. He told us he would be able to take our evidence and show an exclusive audience what we have discovered. These powerful people will influence other leaders to design change and encourage new directions of protection. But... before that he will take our evidence and show it to the Mexican District Attorney so he can open an investigation, make arrests and remove these people from the equation.

As of today, four Poachers face 8 years in prison each. A Mexican prison.

Although this is a good result... I am haunted by the vacant eyes of a thousand baby sharks, the dead baby Sea Lions and the complete lack of respect for life and the ocean these Poachers demonstrated.

As my friend Dale put it:

“The poacher is an international fugitive, not just a mexican one. The mind of a poacher transcends borders and morality, they are of the same mind no matter where you go. Out for fast easy money with no regard for the law, or the world for that matter”.

I will never stop Hunting Poachers. The rECOn Mission has just begun.