The dive industry is a funny place.

For the most part folks are content to experience the wonders of the undersea realm, rinse, and repeat.

Then there are folks like Russell Easton who are a newer kind of diver, ones who are seeking to "make a name" for themselves.

You almost can't blame small minded shark divers like Russell. For the past decade a few within the shark world have schooled guys like him with a never ending parade of stupid stunts with sharks.

We have all seen the images and sadly the videos too.

These shark stunts get picked up by the mainstream press, usually to the somewhat hollow industry member howls of, "we didn't know the press was that bad!" and then broadcast all over the world.

Guys like Russell here are just waiting for their chance to be a media big shot.

And they get it from this gal, Alison Smith-Squire, who is a writer, journalist and media agent selling exclusive real life stories to newspapers, magazines and TV. She owns the Sell My Story website Featureworld.co.uk, which was set up to help ordinary people, like our friend Russell, sell their stories to the press for as much as $9000 USD.

Not bad stuff if you can get it.

Problem with this months mega viral "shark attack story" featuring Mr.Easton is the fact that he allegedly ripped the images of him getting mauled by a Tiger in the Bahamas from another diver who was there on the same dive. The one who took these images of Russell in the first place.

It's a bit of an industry blow out right now.

You have Tiger shark image sets that malign a perfectly good and safe shark diving site, the shark attack subject which makes everyone involved look like rank amateurs, and the fact images were allegedly stolen, sold to the highest bidder, and then regurgitated onto the main media stage like the stomach contents of an overheated Andean Condor (Vultur gryphus).

By the way Condors are vultures that feed exclusively on rotted matter so we thought the analogy was spot on.

Is there a solution to this?

Probably, if we can get past the howls of "we didn't know the press was that bad!".

We might suggest that Russell appear on some sort of Banned Forever Shark Diving List, his dreams of going to Cat Island should be crushed, and if he ever finds himself at at DEMA with a name tag that says "HI, I'M RUSSELL EASTON," taken out the back and dumped into the nearest trashbin.

Hopefully one that is packed full with the stomach contents of several overheated Andean Condors (Vultur gryphus).

You get the picture, and sadly for the rest of us, we get to clean up what Russell's picture left behind.

UPDATE: We also called and emailed Alison Smith-Squire to ask her how this story came about, including the shocking images and storyline, here was her immediate response:


"Russell Easton signed a form saying he had the rights to sell the photos and you must take this up with him.The copy was read back to him and I spoke with Russell just 30 mins ago and he is absolutely happy with his quotes, I am sorry but I can't help or go into it any further." 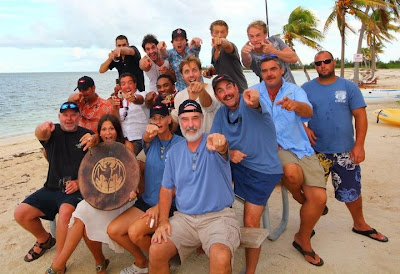 Frazier Nivens in the center, celebrating the completion of another commercial production in the Bahamas, 2011.

For those who know him they know he's one of the last, truly, great guys in our industry. He's also extremely talented underwater and we have thoroughly enjoyed the time we have spent working with him in the Bahamas.

Unfortunately Frazier suffered a setback this month in the form of a detached retina and whopping medical bill.

The eye will heal and for an underwater cameraman shooting RED this is great news indeed.

The whopping bill is another issue all together.

If you want to help there's a fund that's been set up to help Frazier out. We're in, and with the help of friends, he'll fully recover this setback as well.

Or checks can be mailed to: