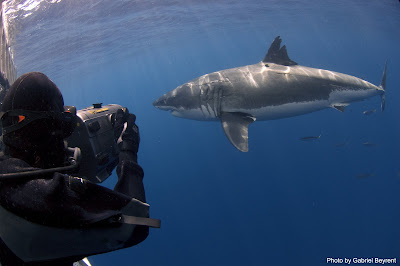 Richard Theiss will be on our next expedition to Isla Guadalupe with an interesting group this week:

I will be offline for a few days as I will be returning to Isla Guadalupe with Shark Diver aboard the Horizon to film great white sharks for WildCoast.net, Televisa SA, and Telemundo.

WildCoast.net is a California- and Mexico-based ocean conservation group that tackles a wide variety of ocean conservation issues but with a decidedly Spanish-speaking emphasis. That gets them involved in issues ranging from Baja, Mexico throughout Latin America and anywhere worldwide where a Spanish-speaking perspective can be effective. Televisa SA is one of Mexico's largest broadcasters and Telemundo services Hispanic U.S. and Mexican communities and all through Latin America.

WildCoast.net is working with these broadcasters to promote stories about shark conservation and shark ecotourism. While there is not a major market for shark fins in Latin America, there are commercial operations that engage in shark finning to meet Asian demand. Within their borders, there is primarily a limited demand for shark meat and then there is the greater lost tourism dollars from shark ecotourism when compared to the value of a dead shark. Along the coast of Baja, juvenile white sharks are caught for their meat and teeth; because of the white shark's slow rate of reproduction, this can have a profound impact on overall populations.

Whether or not a country is a major consumer of shark products, it's important that everyone understands the critical and necessary role that sharks play as ocean predators and scavengers.

The oceans can't do without them.
Posted by Horizon Charters Guadalupe Cage Diving at 3:47 PM No comments: 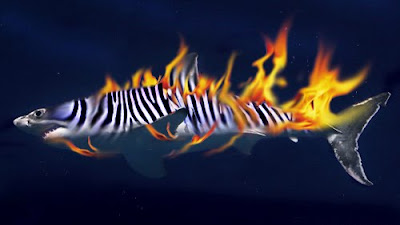 They say the best way to know someone is by the "the company they keep".

We have been covering the ongoing battle in Hawaii to save two shark diving operations from overzealous politicians who are using the fear of sharks to sell a homemade political agenda.

That agenda will turn 40,000 shark tourists away from Oahu at a time where tourism dollars are at an all time low, in the worst economy Hawaii has seen in the past 40 years.

Here's the good news. After face to face meetings with Rep.Gene Ward in Hawaii last week, the anti-shark diving mandate from his office has been clarified from a complete "ban on all shark tours" to a "ban on chumming" which will culminate in proposed legislation that local operators can get behind and work with politicians for win-win tourism solutions.

Rep.Gene Ward should be thanked for taking this stand. It shows he is a politician that understands all points of issues and someone who is pro tourism, even if the touristic endeavor is "out of the box".

40,000 shark diving tourists and the money they pump into Oahu's economy is a hard number to work against politically - some will try, but the old argument of "it's the economy stupid," trumps most agendas.

But back to the "company you keep" discussion.

Rep.Gene Wards office is also the home of the Shark Task Force and it's close affiliation with two virulent anti-shark diving websites Safe Waters Hawaii and Stop Shark Feeding Hawaii. These websites feature an overflowing bacchanalia of misinformation, shark attack hype, and toxic quotes from some of the worst sources on the Internet.

A quick look at Safe Waters Hawaii shows an affiliation with the Pelagic Shark Foundation out of Santa Cruz and here's where "the company you keep" begins to embarrass Rep. Gene Wards offices:

The National Oceanic and Atmospheric Administration announced Friday that it has levied a $21,000 fine against the Pelagic Shark Research Foundation for violating its research permit while helping a film company obtain footage of a shark near Año Nuevo north of Santa Cruz.

The spot is within the Monterey Bay National Marine Sanctuary, which is administered by the National Oceanic and Atmospheric Administration.

Ray Torres of NOAA said the violation was discovered last August after the Discovery Channel aired the shark video, which was filmed in 2001.

"We would never do anything to hurt a shark," Sean Van Sommeran, executive director of the Pelagic Shark Research Foundation, said Friday. "In our permit it says a film crew can visit us. We followed standard operating procedure."

NOAA said Van Sommeran's group violated two terms of its research permit when it allowed Shark Entertainment to accompany foundation researchers into the sanctuary to film sharks for entertainment purposes. The company was producing "Air Jaws II," a film about great white shark behavior in South Africa, Australia and California.

The foundation was also fined for using a "Hollywood mock-up" of a seal to lure sharks. The permit forbids use of lures in connection with a media venture.

"It was a violation of sanctuary rules," said Torres, a special agent for NOAA.

Although the film was shot in October 2001, it wasn't publicly aired until 2002. Torres said phone calls from researchers and shark enthusiasts helped alert the National Oceanic and Atmospheric Administration.

Torres is unsure whether the Pelagic Shark Research Foundation's permit will be revoked but there could be more restrictions placed on the foundation.

The Pelagic Shark Foundation received a permit in 1999, primarily to be used for tagging, behavioral observation and photo identification of white sharks in the area.

Rep.Gene Wards office should reconsider all affiliations with anti-shark diving websites and web pages that feature groups that may cause his office political embarrassment now and in the near future - including staff members from his offices who are working with these websites.