Is shark diving good for conservation?

Conservation and Shark Diving are often seen as opposites and not compatible. Let's look at some of the concerns raised and see how valid they are.


The biggest issue a lot of people have with shark diving and specifically feeding dives is that "It conditions sharks to associate people and divers with food!" While it does indeed condition sharks to associate divers with food, it definitely doesn't condition those sharks to associate divers AS food. The sharks at the Shark Reef Marine Reserve are being fed 5 days a week and I dove on a non feeding day. I got to about 45 ft when a few Bull Sharks sharks approached me, clearly looking for food. After they swam around me for a little bit, they realized that I didn't bring any food and they left. At no point did they show any indication that they looked at me as food or made any attempt to bite me. I actually think that being around divers at feeding sites makes the sharks less likely to attack. If I would be approached by a bunch of Bull Sharks at a non feeding site, I would be a lot more concerned, since it is unusual for them to approach divers without being attracted by some kind of food or chum source.

Another argument against feeding sharks is that it alters their feeding and migration behavior. Since I'm not a scientist that has studied this issue,  my experience comes from observing and diving with sharks, I defer to those who actually studied this issue. There are a few good papers out that are addressing this.

This one is from 2013 by Juerg Brunnschweiler and Adam Barnett: https://fijisharkdiving.blogspot.com/2013/03/feeding-bull-sharks-in-fiji-paper.html

Essentially they are saying that it has no real impact on their migration and hunting behavior. Click on the links above for more detailed information.

OK, so shark feeding is not as bad as people think, but is it actually good for conservation? While there are certainly some outfits that don't have conservation in mind when they do their shark dives, there are also responsible operators who care deeply about conservation and who have accomplished some amazing things.

We all know about the problem associated with the overfishing of sharks. If we want to protect sharks, we have to find a way for the shark fishermen to make a living doing something else.When we argue that a life sharks is worth hundreds of times the amount of a dead shark, we have to make sure that a life shark is worth more to the fishermen as well and not just to the tourism industry.

This is what Beqa Adventure Divers (BAD) has accomplished in Fiji. They got a fishing village to agree to not fish on a reef in exchange for a fee paid by all the divers. "They also hired people from fishing villages and trained them to be Divemasters, Instructors and Boat Captains. When they started diving at that reef, an initial fish count netted about 280 different species of fish, which for the south pacific is very dismal. Ten years later, another fish count showed over 480 different species. The number of sharks seen at the feeds also increased from a handful to sometimes over 100. 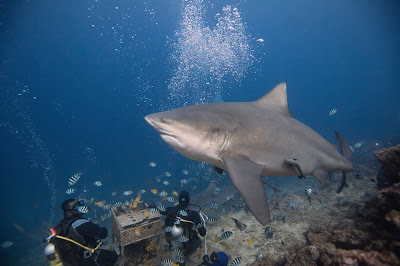 The efforts of BAD has resulted in the reef the shark dive takes place on being declared a national underwater marine park, the Shark Reef Marine Reserve. To my knowledge this is the first time a private entity managed to create a national park. Not only does the fishing village continue to receive money from the divers, which they use for educating their children, creating opportunities outside of fishing for them, but the ones who are still fishing now catch more fish outside of the reserve than they ever caught in and outside. This is clearly a win win situation, where the sharks, the divers and the fishermen all profit. 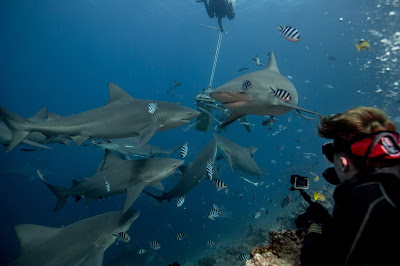 So clearly, operating a shark feeding dive has benefited not only the sharks, but the reef as a whole. Shark Diver is proud to support BAD by taking a group of divers to dive with them every year. This year we are heading there in May. Since we are based out of a hotel, the dates are flexible. Call Cindy at 619.887.4275 or email crew@sharkdiver.com for more info.

Here is a little video of what you can expect to see on your trip.

About Shark Diver. As a global leader in commercial shark diving and conservation initiatives Shark Diver has spent the past decade engaged for sharks around the world. Our blog highlights all aspects of both of these dynamic and shifting worlds. You can reach us directly at staff@sharkdiver.com.
Posted by Shark Diver at 2:34 PM No comments:


For the last couple of days, the internet has lit up with postings of Ocean Ramsey diving with Deep Blue.


While Deep Blue was actually spotted and filmed by Mark Mohler and Kimberly Jeffries, the female Great White Shark that Ocean Ramsey was diving with was not Deep Blue, but another massive female named "Haole Girl" by the diver who first reported her. Check out her markings at the pelvic fin vs. the ID picture of Deep Blue. You can clearly see that it is not the same individual.


A lot of people have commented that it really doesn't matter if it was Deep Blue or another shark. So what's the big deal?

While it certainly didn't make a difference in the experience the divers had with this shark, it matters greatly when Ocean Ramsey claims to be a scientist and doing these dives for research. From a scientific perspective, it is far more interesting to know that there are other massive females out there than to "show how harmless these sharks are". The whole reason we do have a database of these sharks is so that we can have population estimates and find their migration patterns. I also find it puzzling that people portray great white sharks as either mindless killers or as harmless. They are neither! Why can't we just love them for what they are? Awesome predators, neither out to get us nor wanting to be our "friends"! I love these sharks and I'm not afraid to say, it's not a mutual feeling!

A completely different problem with the diving taking place around this shark is described by "Doc Domeier", one of the preeminent shark researchers at Guadalupe Island. Doc, along with Nicole Lucas-Nasby are the scientist at the Marine Conservation Science Institute, the first scientists to tag and catalog the great white sharks at Guadalupe Island.

Here is what he has to say on Facebook

Ocean Ramsey has Jumped the Shark...Literally and Figuratively
I was going to let others chastise O. Ramsey for riding the white shark in Hawaii, but then I saw her post this: "I waited quietly, patiently, observing as she swam up to the dead sperm whale carcass and then slowly to me passing close enough I gently put my hand out to maintain a small space so her girth could pass." Take a look at this video and see if you feel her words are consistent with her actions. Years ago she came to social media fame by illegally riding white sharks at Guadalupe Island. Not only is it illegal in Mexico, it is unethical the world over. The number 1 rule of legitimate shark diving operators is DON'T TOUCH THE SHARKS! This is not shark advocacy...it is selfish, self-promotion. Look at all of the other people in the water hoping for a once-in-a-lifetime experience...instead they can't even take a pic of the shark. And lastly...posting selfies with white sharks is really the wrong message..these are very dangerous animals. Yes, in this case they were very satiated and unlikely to bite...but the average person should not be hopping in the water with them. Would you go on a safari and ride the lions? Remember what happened to the bear whisper in Alaska???...he thought he knew them so well that he was part of their family. One day one of the bears killed him and the poor woman that was with him. And FYI, despite what she says, that’s not Deep Blue she’s harassing. It’s a newly discovered shark that has been named Haole Girl by the diver that first reported her to us.

Before you claim that this is just sour grapes and he simply doesn't like Ocean Ramsey, read his reason for not approving of Ocean's behavior.

Many people who saw my last post may wonder: "Hey, what's the bid deal...the sharks weren't hurt by people riding them." Let me give you a bit of background on white shark life history. Females only give birth once every two years, and sometimes the process is so energetically taxing that they will skip a breeding cycle. All 3 sharks observed feeding on the whale were female...and there's a 50% chance each one was pregnant. In fact, Deep Blue is almost certainly pregnant since she has been pupping on odd years recently. Pupping time is just 4 months away, meaning these big girls are currently feeding about 500 pounds of babies in their uteri! These sharks spend almost their entire 18-month gestation in the deep offshore waters between the mainland and Hawaii, where food is very, very scarce. I led the very first expedition to that area, sometimes referred to the White Shark Cafe or Shared Offshore Foraging Area (our preferred moniker), and we found almost nothing that we would recognize as white shark food. We did find quite a lot of sperm whales, so maybe the occasional encounter with a dead sperm whale is the majority of the caloric intake for these huge sharks! Harassing a pregnant white shark while she is trying to feed could cause her to leave the meal...impacting her ability to successfully carry her pups to term or reproduce the next cycle. Did you know that the very next day after all the videos went viral there were about 60 people floundering around that dead whale in hopes of having their encouter with a white shark? Guess how many sharks were observed: ZERO! Don't you think all those people in the water might intimidate the sharks?? And if they try to come in and feed they have people climbing all over them, all wanting to be like O. Ramsey? Think about that....

You can read all of Doc's posts here
I have to agree with Doc. There are far too many "researchers" who are more interested in getting media exposure than doing actual research. In their zeal to get attention they often do things that not only don't help shark conservation, but actively hurt it. I've been diving with Great White Sharks for over 20 years. We discovered the sharks at Guadalupe while SCUBA and freediving, so I know firsthand what it's like to come face to face with a great white shark and I can say that the experience is no less exciting when you are safely in a cage. Sharkdiver will never allow out of cage divers at Guadalupe Island. It is illegal and dangerous. There is no reason to go outside of a cage, other than to brag to others about having done it. That's why we call what we do "Safe and Sane" Shark Diving.

If you want to experience coming face to face with a Great White Shark, give us a call at 619.887.4275, email crew@sharkdiver.com or visit www.sharkdiver.com for more info.


About Shark Diver. As a global leader in commercial shark diving and conservation initiatives Shark Diver has spent the past decade engaged for sharks around the world. Our blog highlights all aspects of both of these dynamic and shifting worlds. You can reach us directly at staff@sharkdiver.com.
Posted by Shark Diver at 2:31 AM 2 comments: