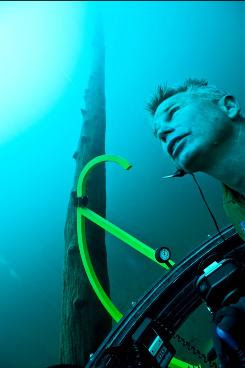 The Undersea Voyager Project is one of our favorite submersible/conservation efforts right now. Recently the team was in Lake Tahoe making news and discoveries:

SOUTH LAKE TAHOE, Calif. — A team of submariners that spent the month of May exploring and examined, among other things, evidence of an earthquake fault that may have ruptured thousands of years ago, is hoping the operation is just the beginning of their underwater explorations.

Scott Cassell, the sub's captain and founder of the non-profit Undersea Voyager Project, says his team has plans for a five-year mission to gather information and develop ideas to help restore endangered bodies of water around the world.

The goal, Cassell says, is to collect data and attract sufficient attention to prompt people and governments to halt pollution and overfishing and take other actions to protect threatened bodies of water.

"I think it's a very useful tool," said John Kleppe, a scientist who for years has researched submerged trees, some more than 3,000 years old, in Fallen Leaf Lake just west of Lake Tahoe. The trees, which grew when the lake level was lowered by lengthy drought, provide a "very good record of climate change," Kleppe said

With that memorable quote one of the most remarkable announcements in fisheries conservation was broadcast the planet this week, as maverick tuna baron Hagen Stehr told the world his team had Bluefin Tuna breeding in captivity.

Worldwide tuna stocks are down 70-80% as massive netting operations capture the last remaining tuna, netting in some cases 100% of the school.

The 60 million dollar Australian gamble to raise this valuable species in captivity has seen its share of set backs and disappointments with many "tuna pundits" saying it could not be done.

You can always bet on an Australian to come up with a solution to almost any problem.

Full Story
Posted by Horizon Charters Guadalupe Cage Diving at 8:36 AM No comments:

We have been fans of the Chumslick Blog (written by an actual shark) for a while now.

If commercial shark diving in Hawaii is to survive the virtual onslaught of anti-shark diving sentiment being levied against it by a handful of islanders, politico's and malcontents, the following industry wide help will be needed.

2. Letters from industry filmmakers and photographers to tourism Hawaii and government

3. Letters from wholesale and regional tourism companies who book Hawaii or the region

4. Pro Hawaii shark diving website that ties in all these elements

This is not rocket science, it is Media 101. Hanging in the balance are two good shark diving companies with unblemished track records and thousands of satisfied customers.

As an industry member you can support these operations, without your support these operators future remains in grave doubt. What's a stake is the future of other sites when Hawaii closes down shark diving in their waters forever.
Posted by Horizon Charters Guadalupe Cage Diving at 8:12 AM No comments: