Something interesting from Fiji this week. The local papers there always have great shark stories.

A FRIDAY night fishing trip became exciting after a baby shark was caught just off the waters of Naqara Island and Wainadoi jetty.

The shark was brownish-yellow and had black spots. The man who caught it is Horace Morell of Vatia, Labasa. Mr Morell, who now resides on Naqara, said he had seen other sharks but not one of this colour and shape.

"I was surprised because I have never seen a shark with spots and yellow. I smacked it but my wife said to let it go. I threw it back into the sea. Instead of swimming away, it circled the boat and came back so I caught it again and put it in a cage.

"I haven't decided what to do with it yet but I think I will keep it for a while. I used fish bait to catch it. It has a small mouth and gills. It looks like a Leopard shark because of its black spots but I am not sure."

Mr Horace said he wanted to get in touch with shark feeders of Beqa who might be interested.

He said he was able to put his hand in the shark's mouth. His wife Mele said it was also the first time for her to see that kind of shark.

She said they might give it to someone willing to look after it. In the meantime, they have not weighed their options on whether to sell it for research.

Beqa Adventures Divers Limited operations manager Andrew Cummings said the description of the shark could mean it was either a Leopard or Zebra shark. He said it was a particularly uncommon find in Fiji waters but said the shark was harmless. 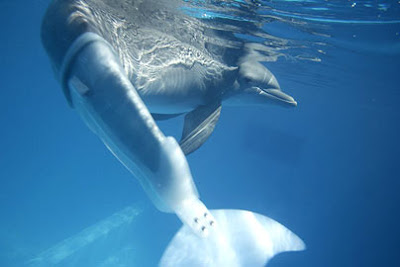 If there's one thing we love about the oceans and covering this subject it's stories like this one.

Researchers and staff at the Clearwater Marine Aquarium
rescued a young Bottlenose dolphin last year who's tail was unfortunately lost to a crab trap.

What they did with her after that is nothing short of amazing:

"CMA's marine life stranding response team is one of the nation's most successful. Many of the sick or injured animals we rescue are released after rehabilitation, but some become permanent CMA residents, due to the extent of their injuries. Residents include dolphins, sea turtles and river otters. The most amazing rescue story of all is Winter's."

Posted by Horizon Charters Guadalupe Cage Diving at 10:24 AM No comments:

State: No chumming for sharks near beach 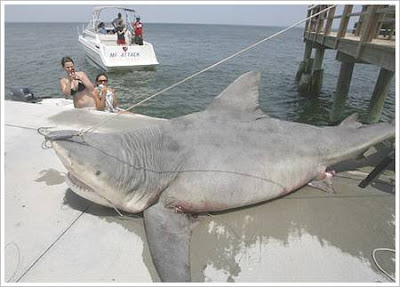 Recently state regulators in Alabama drafted new laws banning "bloodbaiting" 300 yards from beaches and swimmers in an effort to protect them from sharks?


May, 2008
By RYAN DEZEMBER
Staff Reporter

Aiming to protect beachgoers, state regulators say they expect by the middle of this month to enact a ban on chumming for sharks and other within 300 feet of the beach.

The law, which was drafted by the Alabama Department of Conservation and Natural resources with input from Orange Beach officials, generally prohibits anyone from targeting sharks by chumming or bloodbaiting, whether it's with fish parts or synthetic attractant.

With state budgets slashed how are they going to enforce this new regulation?

Posted by Horizon Charters Guadalupe Cage Diving at 10:10 AM 1 comment:

You Know You're Doing Well When... 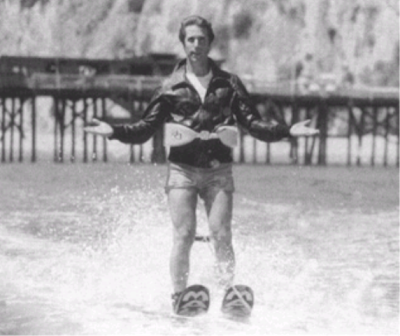 This morning one of our blog fans sent in a link to another sharky website. We're not going to mention it by name-but it was nice to see they have all but completely copied our format.

In the dive industry and the shark diving industry there are leaders, dreamers, and all the rest.

Our little shark blog hit the Internet back in December with it's off hand brand of looking at the people in shark diving industry and the oceans eco side.

It was a hit. Thanks to our readers who liked what they saw and wanted more.

It would be nice to see them come up with something original for a change as well, but like we said there's the dreamers and all the rest. Heck we'll take the compliment;)
Posted by Horizon Charters Guadalupe Cage Diving at 9:38 AM 3 comments: