About the only place on the planet where simply enjoying a morning shower nets you a tub filled with sharks, Australia is one sharky place.

Not surprisingly the news coming from the land Down Under this week is all about Lake Macquarie and an ongoing series of shark sightings that has locals and the media doing what they do best...screaming about it.

This weeks encounters feature a wayward Hammerhead or two that found themselves Easter weekend checking out shore lines filled with families BBQ'ing and waiting for their turn to get into the water:

Glenn Wilson, of Floraville, photographed a three-metre hammerhead from the fly-bridge of a cruiser near Summerland Point on Good Friday.

"We saw it 200 metres from the boat, we cruised in and it came straight up to the boat," Mr Wilson said. "It was looking for a feed. I'd say it was pretty hungry.

"If I had my game-fishing gear, I would have caught it." It was the first time he had seen a shark in the lake, despite cruising almost every weekend. "I've been a bit sceptical about sharks in the lake, but they're out there," he said. 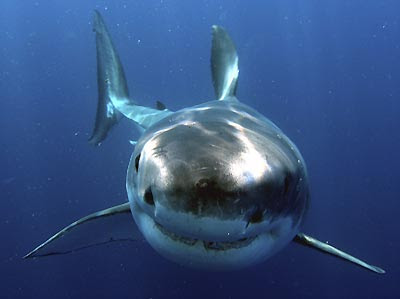 Just when the politics of the new white shark dive site in New Zealand seemed like it was going to terminate one of the best new dive sites on the planet, co-owner Peter Scott has found a way to make it happen. He's also reporting 5 meter white sharks on site this week

Without a doubt the hottest white shark diving ticket right now for film and television and shark research lies not in Mexico but in New Zealand:

Things are going well but not doing tourist as yet due to still working through all the legal side of things.
Numbers have been good with 18 regulars. Department of Conservation tagged 9 with satellite tags. We've had a few 5 metre ones around the cage, coming really close, keen to show the dentistry but appearing inquisitive rather than aggressive. Changed our burley from mackeral to Albacore tuna with great results. May come and visit when the unrest in Mexico settles. Still monitoring but the temperatures have now dropped to 12 degrees C. Will keep you updated.

Also if you go into www.odt.co.nz, Saturday 19th April you will see a photo that we took 2 weeks ago that went in the newspaper with an article.