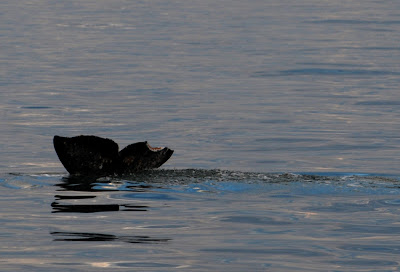 What you are looking at is the fluke of a migrating Grey Whale (Eschrichtius robustus) off the coast of San Diego at Dana Point last week. A fluke with a recent bite out of it.

The image is courtesy of Dana Wharf Whale-Watching with a hat-tip to Peter Thomas Outdoors who brought it to our attention.

What we noticed almost immediately were tell tale triangular marks of what might be a bite from the Great White shark.

Typically at this time of year it is the Killer Whale (Orcinus orca) that is the predator de jour of the Grey Whale, and tail bites are their signature.

This whale will survive, and probably be a bit wiser from it's latest encounter with a predator.

Our question of the day - which predator was it?
Posted by Horizon Charters Guadalupe Cage Diving at 7:56 AM No comments:

Movements and Ecology of Fishes at Palmyra Atoll

Numerous marine top predators are in decline world-wide. Quantifying the effects of these declines requires an understanding of the ecological role of different trophic groups of fishes in areas where human impacts are low (i.e. an ecological baseline). However, there are very few areas where the impacts of humans have not been felt. One exception (to a certain degree) is Palmyra Atoll, in the central Pacific Ocean. Due to its remote nature, its status as a US federal wildlife refuge, and the absence of a human population, Palmyra has low levels of anthropogenic impacts and subsequently there are high numbers of top predators such as sharks.

One component of an animal's ecological "niche" relates to patterns of space use. Spatial ecology can be measured over multiple spatial and temporal scales, which requires a variety of tools and techniques. We have been using passive and active telemetry to look at the movements of several fish species, from a number of trophic guilds, at Palmyra Atoll over periods of several years. We study movements by tagging fish with small acoustic tags which emit high frequency acoustic signals. These transmitters are detected by an array of underwater listening stations, which we have deployed throughout the atoll. Every year we dive and download these receivers, and we can determine which fish have been where and when. Species studied include top predators such as sharks (blacktip reef and grey reef sharks) and teleosts (Jacks and Snappers), and planktivores (manta rays). We supplement the study of movement patterns with the use of stable isotopes to look at trophic ecology, and novel data-loggers to study feeding and digestion in situ.

Studies to date show that there is some spatial segregation between species, and differences in the scales of movements and levels of site fidelity. Individuals of all species show some degree of diel and tidal habitat shifts, occupying different areas between the day and night. Results also show that trophic ecology and foraging success can vary for top predators throughout the atoll, even over small spatial distances.

The study provides crucial data on niche partitioning and competition between fishes at a tropical atoll, but it also has wider conservation implications. Marine Protected Areas (MPA's) are areas where no fishing occurs, which allows fish to reproduce and grow, replenishing fish populations outside of the MPA. However, an understanding of fish movement is crucial for proper MPA design. For example, if a fish uses an area larger than the area of the MPA, then it will spend a significant portion of its time in locations where fishing may occur. As such, poorly placed MPA's can actually provide a false sense of security with regards to conservation. Increasingly it is becoming clear that fish species may differ in their movements and habitat use, and that multi-species telemetry studies are required to evaluate MPA effectiveness. Palmyra Atoll is essentially a large MPA, and understanding patterns and scales of movements of fishes within the atoll can be used to evaluate MPA efficiency in other locations.

This work is supported by the Palmyra Atoll Research Consortium, The Nature Conservancy, National Geographic Society, Gordon and Betty Moore, the David and Lucille Packard foundation, and Marisla Foundation.

Complete Post.
Posted by Horizon Charters Guadalupe Cage Diving at 7:49 AM No comments: