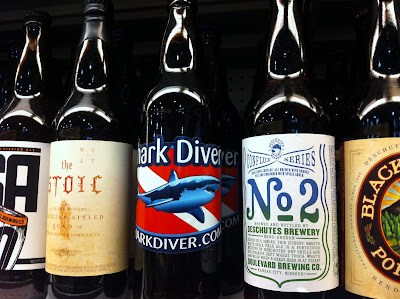 It's the culmination of a several month long project with a small independent brewery and your friendly neighborhood shark diving company Shark Diver to produce "Conservation Brands."

It's an idea we have been tossing around for a while, creating a long term money making venture for shark conservation with 100% of the profits going back into projects for sharks worldwide.

The idea is not new, thanks to the Cayman Islands Beer, who give back a small percentage of profits for shark conservation efforts.

We decided to give back 100% and this weeks launch of the Shark Diver IPA at select test market stores should tell us how the market reacts to the brand and the beer. It is really great stuff and many Kudos to the brew team who have made the Shark Diver IPA a small but interesting reality in the nationwide micro brew market.

Drink well and be sharky.

We'll be posting a list of stores in the coming weeks where you might discover your own Shark Diver IPA, keep your eyes peeled and let's go save some sharks.
Posted by Horizon Charters Guadalupe Cage Diving at 7:07 PM No comments: