TED-If You Don't Know, You Should

Robert Ballard-Speaking at the TED conference back in 2007. Why are we looking into space when we have unexplored oceans right here?

Posted by Horizon Charters Guadalupe Cage Diving at 6:53 AM 1 comment: 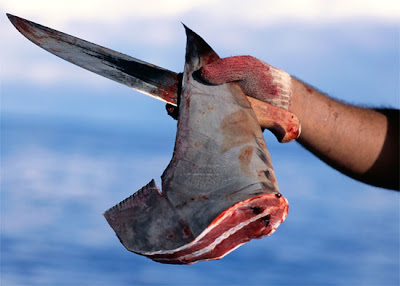 While it is illegal to harvest shark fins from Hawaiian waters...it is not apparently illegal to dry and process shark fins in Hawaii.

Hawaiian law allows out of state shark fins to land in it's ports, be processed and dried, and then shipped to waiting clients in Asia.

It's a classic loophole-and one that just recently surfaced in Hawaii this week.

Close to 700 sharks comprise one ton of fins. This haul equaled 8400 sharks:

State crews were called in to inspect a shipping container on Thursday after they got word it was filled with about 12 tons of shark fins.

It is illegal to harvest shark fins in Hawaiian waters but shipping documents reportedly showed they were caught overseas. The local company receiving them says they'll be dried here before sending them to Hong Kong. The manager at RC International says he's been doing this for 17 years and wondered why this shipment came under investigation.

Posted by Horizon Charters Guadalupe Cage Diving at 6:43 AM No comments: