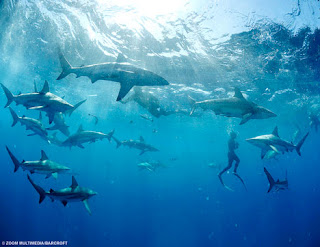 In an effort to please Chinese business Americans are serving up Sharks Fin in heroic portions.

This time the offending American company is none other than Delta Airlines. You might think after Disney's disaster with Sharks Fin in China that someone at Delta might say "you know, this might not be the best of ideas".

Shanghai, China — They served Coca-Cola along with the "braised shark's fin soup with cucumber and fish maw" Monday night at the welcoming celebration for Delta Air Lines' inaugural non-stop flight from Atlanta.

A blues band belted out "Georgia on My Mind" at a 10-course banquet to celebrate Delta Flight 19, which touched down at 2:09 p.m. local time -- the middle of the night back in Atlanta.

"This flight fills a critical void for the 65 million people in the Southeast," Kenneth Garrett, U.S. consul general for Shanghai, told a crowd of about 200 people at the 88-story Grand Hyatt of Shanghai.
Posted by Horizon Charters Guadalupe Cage Diving at 9:57 PM No comments: