I was surrounded by bull sharks!

I just got back from my 4th annual trip to Fiji, diving with the "BAD" (Beqa Adventure Divers') bull sharks of the Shark Reef Marine Reserve. It is an unbelievable experience to be surrounded by lots of these awesome predators. 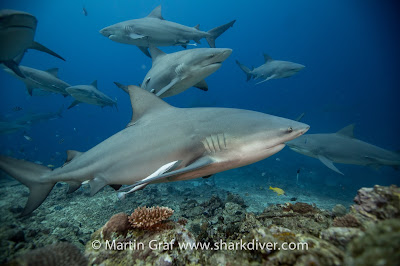 What really fascinates me is not the sheer number of sharks though.  The really interesting part is that I'm starting to recognize some individual sharks, not only by distinctive marks on them, but by their behavior.


Anyone thinking that "a bull shark is a bull shark" should come to this place and see for themselves. These sharks have very different "personalities", some very mellow and cautious, others not so much. Of course you need to do more than just one or 2 dives to notice these differences. The first few dives your are simply going to be blown away by the sheer number of sharks and and by how close they'll get to you.

Common wisdom holds that when it comes to sharks, size matters. The big shark always wins over a smaller shark. What I found is that this is not always the case. Some sharks think they are a lot bigger than they really are and compete with the bigger sharks for the tuna heads on offer. "Top Sail" for example is not one of the bigger sharks, but is very adept at getting more than her fair share of tuna heads. 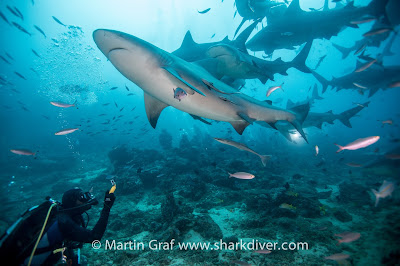 If all the bull sharks are not enough for you, just when you think the dive is over, there is the safety stop. Far from a boring hanging on to a line, waiting for the 3 minutes to pass, you are face to face wit a bunch of hungry white- and black-tip sharks, being fed by one of the divemasters. 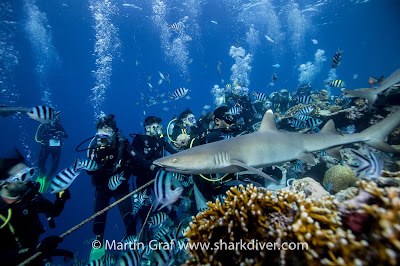 I'm still very partial to "my" white sharks at Guadalupe, but I'm getting more and more taken by the bull sharks of the SRMR and can't wait for next year.

Thanks to all the guys at "BAD", (Beqa Adventure Divers) for your hospitality and another unforgettable trip. You are simply the best! Vinaka vakalevu!

In the coming weeks we'll be posting a special offer for next year's Fiji trip. My descriptions and pictures don't do these sharks justice. You'll have to come and experience them yourself.


About Shark Diver. As a global leader in commercial shark diving and conservation initiatives Shark Diver has spent the past decade engaged for sharks around the world. Our blog highlights all aspects of both of these dynamic and shifting worlds. You can reach us directly at staff@sharkdiver.com.
Posted by Shark Diver at 7:17 PM No comments:

We just completed our 4th expedition to Guadalupe this year and the sharks have been amazing. Unlike in previous years, we are seeing more juvenile females than males this season. There have been over 10 new sharks already and every trip we encounter more new "friends". On each expedition, we encountered over 18 different sharks, swimming along with seals, turtles and dolphins.


As for the regulars, they have been slow to show their faces. So far we have seen "Joker" and "Chugey", who looks amazing by the way. His injuries from a few years ago show fewer and fewer remaining scars.


As a reminder, here is what he looked like 2 years ago. 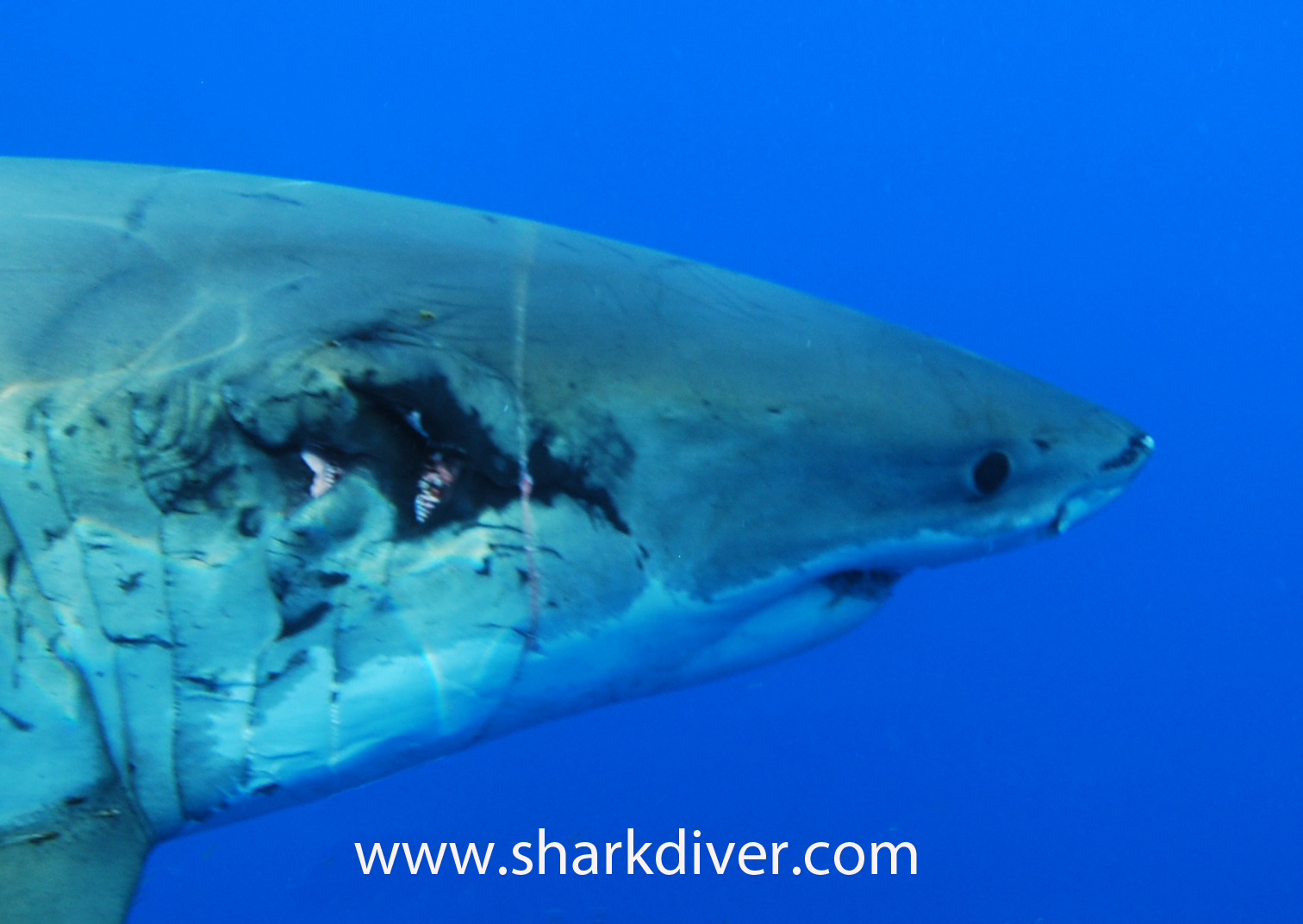 On our last day of our most recent expedition, Bite Face, another long time regular at Guadalupe Island made an appearance for the first time, but most of the sharks we've seen so far have been more recent additions to our database. Amiria, Freya, Screaming Mimi, Andy, #198 and Micks are among those encountered so far.

Tonight we are heading back to Guadalupe where I hope we'll encounter more of our old friends. This is my 16th season diving with these sharks and I'm more excited to head down there than I was on my first expedition.

If you would like to join us on a future expedition or just want some information, contact us at 619.887.4275 or email staff@sharkdiver.com

I hope to get to introduce you to the amazing great white sharks at Guadalupe Island soon!

About Shark Diver. As a global leader in commercial shark diving and conservation initiatives Shark Diver has spent the past decade engaged for sharks around the world. Our blog highlights all aspects of both of these dynamic and shifting worlds. You can reach us directly at staff@sharkdiver.com.
Posted by Shark Diver at 9:40 AM No comments: