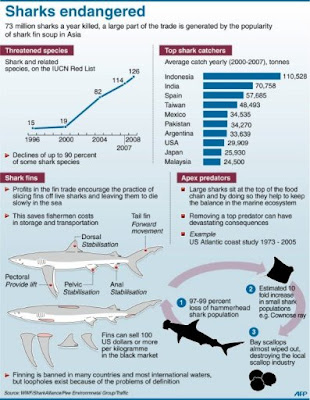 Using available data from PEW Trusts they have produced a very easy to understand PSA that can be used in the fight to conserve sharks.

Too often shark conservationists with good intentions run with wild sound bytes that have little to no basis in hard facts.

One of our personal favorites:

" 70% of the worlds oxygen comes from the oceans, if we kill all the sharks we will not have any more oxygen to breathe"

The battle for the hearts and minds of the general public and of those in Asia often disregard the fact that the people shark conservationists target are savvy customers.

As 2011 dawns for the next round of shark conservation efforts let's stick to the facts and leave the hyperbole behind, as the facts are grim enough without the added and unnecessary doomsday scenarios thrown in for good measure.
Posted by Horizon Charters Guadalupe Cage Diving at 8:32 AM No comments: