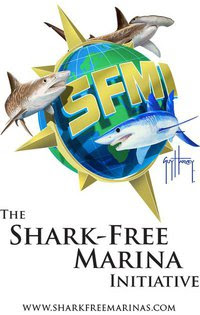 Conservation and marine science authority Dr. Guy Harvey, Chairman of Guy Harvey Outpost LTD., announced today that a photographic image of a Mako shark, taken at the weigh in station of the Bimini Big Game Club and circulating on the internet, was authentic. “It is extremely disappointing that this occurred and is a clear violation of my shark conservation principles and efforts”, said Dr. Harvey, an recognized marine conservation authority and acclaimed artist. The Big Game Club operates under license from Guy Harvey Outpost, a company he co-founded to promote sustainable tourism and marine conservation among water sport enthusiasts and the legions of Guy Harvey followers worldwide.

He confirmed the shark was caught by a visitor to the Big Game Club while vacationing in Bimini over the Memorial Day weekend and the resort's dock staff assisted in hanging the shark up for photographs. The boat's captain, Chase Camacho, confirmed his charter angler fought the shark for over two hours after hooking it while deep drop fishing off the Bimini coast. "It's important to have a black and white policy with no grey areas when it comes to operating as a Shark Free Marina, particularly when my name is on the door”, Guy said in addressing the event.

“The boat's captain believed the shark was stressed to the point of dying, and thought it proper to bring it back to the dock so it could be given to the church for distribution to needy locals,” clarified Dr. Harvey, who holds a PhD in Marine Biology and directs shark research worldwide with the efforts of his scientific staff at the Guy Harvey Research Institute. Underscoring a common misunderstanding among anglers on the resilience of sharks, Guy noted “a nearly dead shark has a much better chance of surviving in the water than on the dock. Sharks are very tough animals.”

Professor Mahmood Shivji, Director of the “Save our Seas Shark Center” at Nova Southeastern University echoed Guy's sentiment. “It's a food cycle issue. We are dealing with a marine ecosystem such that a dead or dying fish provides food resource to the entire marine ecosystem and its best to let the ecosystem operate without intervention, however well intentioned.” Dr. Harvey characterized the event “an unfortunate learning moment for all anglers.” He went on to acknowledge the angler and captain erred with good intentions, and the shark was donated to the local community as intended but noted “in today's world there's nothing to celebrate in bringing any shark to the dock for a photo opportunity”.

With a Guy Harvey designed logo to identify member marinas worldwide, 'Shark-Free' marinas participate in a voluntary program to prohibit sharks from being landed at their facility. “Shark Free marina policies were designed to foster catch and release fishing methods by discouraging any thought of landing a shark for any reason”, Harvey went on to say. “Our Outpost team took immediate action to investigate this when first brought to my attention. Staff has been reminded of their role in helping promote shark conservation awareness by enforcing the policies of a 'Shark Free' marina." The Shark-Free Marina Initiative is a project of The Humane Society of the United States and supported in part by the Guy Harvey Ocean Foundation, an organization Dr. Harvey chairs to foster marine research and conservation.

The Shark Free Marina Institute's web site indicates that as many as 100 million sharks are killed annually, posing a serious threat to the oceans health. The stated purpose of a Shark-Free Marinas is to help reduce the take of sharks and encourage responsible use of the oceans. “With my worldwide efforts to promote shark conservation, particularly in the Bahamas, and my name on the front door of the Big Game Club, I've reminded staff that our marina will adhere to the Shark Free Marina Initiative policies, no exceptions” added Dr. Harvey. “We all have to play a part in protecting these magnificent animals.”

Posted by Horizon Charters Guadalupe Cage Diving at 9:18 AM No comments: 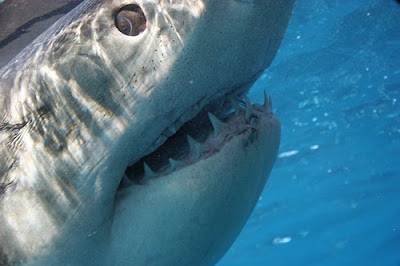