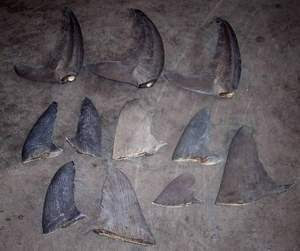 Our weekly feature on Underwater Thrills:Swimming With Sharks is the "Shark Fin Du Jour".

It's a weekly look at Alibaba.com the NYSE of Shark Fin Products and sales on the Internet-Sponsored by Yahoo! Inc.

We will take you to the individual sellers listed on that site and introduce the top companies, what species they sell, and how many thousands of pounds of shark fins they have for sale on the global market.

Today our Shark Fin Du Jour is UMS Enterprises who can source a staggering 500 kilograms of sharks fin per week:

Posted by Horizon Charters Guadalupe Cage Diving at 10:21 AM No comments: 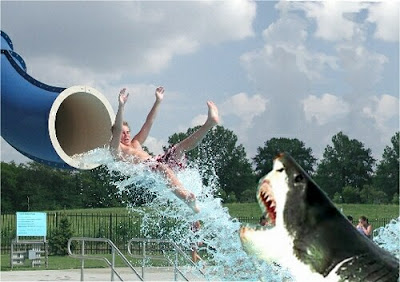 Atlantis resort in the Bahamas announced last month they were laying off 800 employees.

This week a reef shark at Atlantis leaped to it's death on a water slide. Are the two connected in any way?

"Yesterday morning at around 9:30 AM, prior to the resort's waterscape opening to guests, a 12+-year-old female reef shark jumped over an 18 inch wide and 1 foot high sustaining structure into the resort's Leap of Faith water slide".

The Atlantis Aquarists believe the shark was startled by an unusual circumstance that we have no way of defining completely. In the over ten years guests have experienced the Leap of Faith, the reef shark itself, harmless to humans as it is fed regularly by our staff, had shown no previous incidences of leaping out of the water in the marine habitat.

Posted by Horizon Charters Guadalupe Cage Diving at 9:55 AM 1 comment: 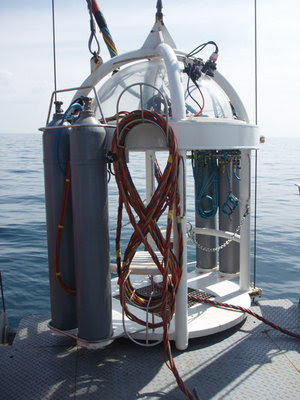 The US Navy's Deepwater Reconnaissance and Autonomous Gateway or DRAG unveiled it's $120 million dollar shark cage yesterday to a group of cheering engineers and at least one congressman from New Jersey.

The DRAG "cage" was originally designed to explore the Antarctic but design set backs and a cost overruns scuttled the first project back in 1972.

DRAG reinstated it's shark protection project with the help of Pentagon Emergency Supplemental funding for Iraq and have now launched the first multi million dollar shark cage in the history of the US Navy. Three more units are scheduled to come online in 2009 and 2010.

"We hope to deploy these units in hot zones around the planet" said Vice Admiral Peter Loyd "we have ongoing operational plans for this unit in the Tigress river in Iraq after the discovery of Bull Sharks there".

The following Underwater Onion was brought to you by Shark Diver. Yes, we know it's been a while since the last U/O but we have been busy;)
Posted by Horizon Charters Guadalupe Cage Diving at 9:24 AM No comments: