How to Make Your Video Viral

A buddy in the U.K just finished directing the following video. If viral video had a home it would be right here.

Sit back, sip your coffee, and enjoy the viral-ness of it all, oh and re-post a few times as well:

SINO's - Sanctuary in Name Only is a pejorative term that refers to a nation state whose recently declared "Sanctuary Waters for Sharks" are considered insufficiently enforced or otherwise not conforming to actual sanctuaries in any form.

The good news about 2011 are the plethora of nations around the world who have signed on for Shark Sanctuaries. The list reads as a triumph to many thousands of hours of hard work and efforts by untold numbers of shark conservationists to see actual conservation change.

But have we reached the Second Act of this shark conservation push?

As Mexico announced a full court ban on shark fishing in their waters in 2012, jumping on the bandwagon in the Latin America behind Honduras, how will they and other nations enforce this ban?

We have seen first hand how hard it is for Mexico to address even basic fisheries policy with white sharks, declared off limits in 2007 in a move that was heralded by shark conservation.

The reality on the ground has been very different for these magnificent animals and other shark species in the region.

As late as August 2011 we have continued to document one small fish market in Ensenada, Mexico where white sharks are still being caught and sold, sometimes as many as six in a day, sold as swordfish and marlin for as little as 50 pesos a kilo.

We began this investigation eight years ago, alerting other commercial shark diving companies and conservation groups in the region with a series of ongoing and well documented blog posts.

The economics behind this continued catch of white sharks and blind eye by the agencies meant to be enforcing fisheries rules and regulations in Mexico is the growing reality of SINO's.

These sharks are the by-product of local inshore tuna and sword fisheries. To comply with white shark bans local Mexican fishermen have three choices:

SINO's are the looming Act Two for shark conservation. Getting a politician to make promises for the environment is a time honored tradition. Getting that same politician or his or her successor to follow through with hard and fast enforcement is where the rubber meets the road.

That rubber will cost millions of dollars to the shark conservation movement who have managed thus far to get Sanctuaries declared at a pace that has been stunning to watch. It has also been a relatively cheap affair, conservation light, with dollars spent verses sanctuary acres created part of the ongoing equation.

Where enforcement monies, infrastructure, and boots on the ground will come from for these newly created sanctuaries anyone knows.

Before another country declares a Sanctuary for Sharks we should be looking at how we are going to manage the millions of remote acres we already have locked away in countries that have a long track record of SINO.

It's where we have to focus in the next decade and it all starts with dollars and a plan.

Posted by Horizon Charters Guadalupe Cage Diving at 8:59 AM 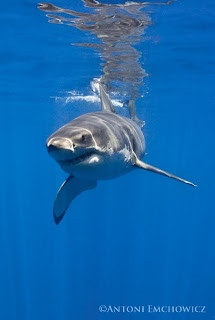 When Discovery Networks came to us seeking some quotes about the commercial shark diving industry you know we had a few.

After a decade in the industry Shark Diver has been innovative, conservation leaders, and commercial film and television developers - all in the name of sharks.

The Discovery Channel article went up last week and we're happy with the outcome:

Companies that arrange for caged shark diving expeditions usually brief you a bit on what to expect. The cages might seem like protection for you, but that’s not the case.

“The cages are for humans,” Douglas says. “Human curiosity is to want to explore past boundaries.”

The three most important rules, according to Douglas: “No. 1 breathe, No. 2 keep breathing, No. 3 Have fun.”

Posted by Horizon Charters Guadalupe Cage Diving at 7:42 AM

The Shark Free Marina Initiative (SFMI) is reaching out all over the state of Florida and asking marinas to help support conserving the shark population in world.

Shark populations worldwide have declined due to over fishing.  Fishpond has joined with many other supporting organizations to help reduce shark worldwide mortality. For more information please feel free to check out the SFMI site – http://www.sharkfreemarinas.com
Posted by Horizon Charters Guadalupe Cage Diving at 7:27 AM