Marshall Islands - No Shark For You! 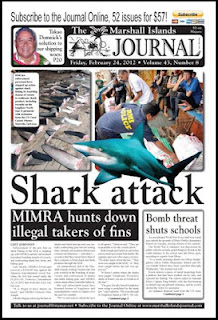 If you want to commercially harvest sharks one of the last places you want to be doing it these days is the Marshall Islands.

Some great enforcement news to close out the week with:

"Last month, MIMRA levied and received a $125,000 fine against the Japanese transshipment vessel Satsuma, the first fine issued under the PL2011-63, Fisheries Amendment Act of 2011 that went into force late last year."

“It is illegal to have sharks on board,” said MIMRA Director Glen Joseph. MIMRA began enforcing the ban on sharks and shark fins late last year, initially confiscating gear but not issuing fines. Instead, enforcement officers put commercial fishermen — and others — on notice that they faced future fines if they continue to bring shark and shark products through the RMI. An unannounced raid at the Marshall Islands Fishing Venture late last year resulted in the boarding of many vessels and confiscation of sharks and shark fishing gear, said MIMRA enforcement officer Marcella Tarkwon."

Complete story here thanks to the Shark Defender blog for the find.

Posted by Horizon Charters Guadalupe Cage Diving at 9:34 AM No comments:

And "The Data" Shall Set You Free!

Cyanobacterial Neurotoxin β-N-Methylamino-L-alanine is undoubtedly evil stuff. Thought to cause all manner of horrible problems in the human brain, think loss of memory and basic bladder functions, and is commonly found in...Florida shark fin?

Or so says a recent study coming out of the University of Miami this week.

What caught our attention was the unprecedented speed at which this study made it to the worlds media outlets. As of this post over 9000 results on Google for this studies title alone. A trademark of one Dr Neil Hammerschlag who, along with a merry band of Fl researchers, has consistently tied shark research data into the global media machine to effectively lead the way when it comes to media messaging, conservation, and really good data.

The study is an important milestone making shark fin less appealing to the masses and giving those on the front lines of the anti shark fin push some additional stone cold facts.

"A potential link between this neurotoxic nonprotein amino acid and neurodegenerative diseases was originally discovered on the island of Guam in the Western Pacific Ocean. Here an exceptionally high incidence of amyotrophic lateral sclerosis (ALS), of somewhat late onset with added extrapyramidal features and dementia (ALS/PDC), was recorded in the late 1940s to early 1950s. ALS/PDC is a progressive neurological disorder with clinical and neuropathological features resembling those of ALS, Parkinson's disease, and Alzheimer's disease"

Posted by Horizon Charters Guadalupe Cage Diving at 8:25 AM No comments: