Get to know the Great White Sharks of Guadalupe

It's been 16 years, since we started diving with Great White Sharks at Guadalupe Island and we have identified well over 200 individual sharks. Nicole Lucas from the Marine Conservation Science Institute is the scientist that started and maintains the photo ID database for all the sharks at Guadalupe, which allows us to know all the sharks we encounter.

Quite a few of these sharks have been seen every year since 2001 and we got to know them quite well. Some of them are easily recognized and have become celebrities, not just for the divers lucky enough to see them face to face, but to a worldwide audience, thanks to videos on Youtube and sharkweek on TV.

I'm going to introduce you to some of my favorite sharks and show you what makes them special to me.

Since the adult female sharks have a 2 year visitation cycle at Guadalupe and the males show up every year and typically much earlier in the season, we get to know the males a lot better than the females. So I'll start my introduction with a male. 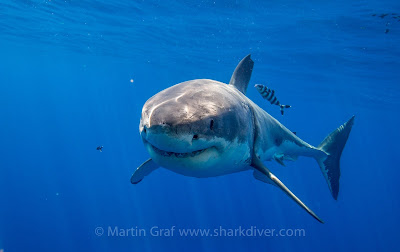 Bite Face has been around every year since 2001. He has grown quite a bit over the year and has mellowed out considerably. When we first met him, he was a sub adult who often got into some altercations with other sharks. That is how he got his name, when we first identified him, he had a big bitemark on his face from a run in with another shark. Nowadays he is much mellower and can be seen cruising around calmly, even when pestered by a sealion.

Bite Face is also famous on wikipedia, where you find this picture of him.


If you look closely, you'll notice that his dorsal fin is intact in this picture and in the photo on top, the very tip of his dorsal is cut. This is a mutilation that is not going to change and is one way to identify Bite Face today. For accurate identifications, we use the color patterns in the transition from white belly to grey top, which is like a fingerprint. (more on that in a future blog).

Bite Face was also one of the first sharks tagged by Dr. Domeier from MCSI, which was filmed for the television series "Expedition Great White" and seen by million. The satellite tag that was attached to him showed that he is heading offshore, towards Hawaii in the summer, before returning to Guadalupe in the fall. He's been doing this every year, since we first met him in 2001.

I can't wait to go back in August and see him again for the 17th year in a row. Come join me and get to know him personally. He loves to swim by the cage and look the divers straight into the eyes.

About Shark Diver. As a global leader in commercial shark diving and conservation initiatives Shark Diver has spent the past decade engaged for sharks around the world. Our blog highlights all aspects of both of these dynamic and shifting worlds. You can reach us directly at crew@sharkdiver.com. Phone 619.887.4275
Posted by Shark Diver at 11:08 AM No comments: