We have been fans of Chris Fallows for quite a while now. As an industry innovator, film and television personality, and a member of the shark diving community he's been hitting on all cylinders for quite a few years now.

This month Chris will once again (this makes 7 times) be featured on the long running series Shark Week seen last year by 35 million viewers.

His latest adventures with sharks takes him from South Africa to Isla Guadalupe. The paddle board video released this week is pretty neat stuff:

Posted by Horizon Charters Guadalupe Cage Diving at 11:52 AM No comments: 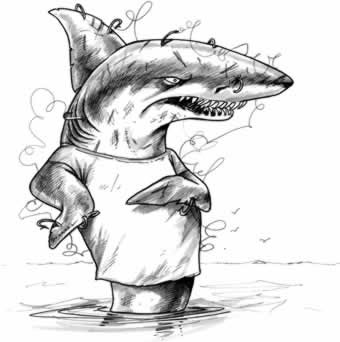 Mossel Bay, 18 July, 2011: Mossel Bay — The Oceans Research team, a marine research organisation working in Mossel Bay, got the surprise of a lifetime today when a 3 meter great white shark breached into their research vessel, shocking a field specialist and her crew

Activity around the boat had ceased for about five minutes and all was pretty quiet at the stern. Schroder describes the incident; “Next thing I know I hear a splash, and see a white shark breach out of the water from side of the boat hovering, literally, over the crewmember who was chumming on the boats portside.” Schroder automatically sprang into action and pulled the crewmember quickly away towards the stern of the boat’s platform into safety.

The crewmembers all jumped towards the stern of the boat as the 3m, 500kg, shark landed on the top of the fuel and bait storage containers. The shark had landed with only half of its body onto the boat and Schroder and her team hoped that as it thrashed it would make its way back into the water. But instead the panicked shark worked itself into the boat getting stuck in between the 1.5x2m area behind the container and boats stern. The shark began thrashing around, destroying equipment and cutting the fuel lines as it twisted and turned on the boats deck.