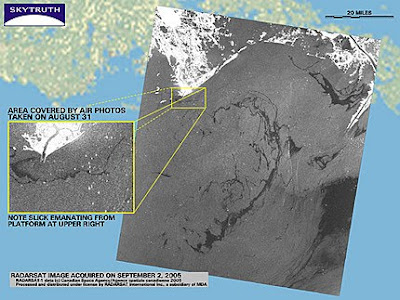 Depending on who you listen to the BP Gulf oil spill is 2-5000 barrels a day.

Then there's Sky Truth. If you have never heard of them here's their link.

They estimate the Gulf spill at a mind boggling 26,500 barrels a day using satellite imaging of the region and some of the best minds in the minerals business.

This would make the current oil disaster in the Gulf larger than the Exxon Valdez spill of the late 90's.

Last night BP dropped the first of three 100 ton proposed containment domes to try and cap the leaks. We wish them the best of speed and good luck. 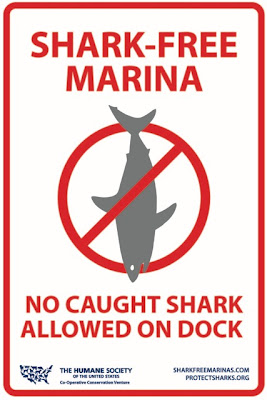 Keystone Point Marina invites you to be part of their boating family:

We invite you to come by and meet our friendly, knowledgeable staff. The marina office is open from 8am-5pm daily. Keystone Point Marina has been making boating simple and convenient for 50 years.

We also understand shark conservation and want to be part of the conservation solution for Florida with the Shark Free Marinas Initiative.

Keystone Point Marina is open from 8am to 5pm daily with 24 hour access to your boat.

Support their business by dropping by their facility at 1950 N.E. 135th Street, North Miami, Florida 33181 and be sure to visit their website at www.keystonepointmarina.com

Are you a marina owner/manager?

Follow their example and register your facility with Shark-Free Marinas today.

This week marks the launch of Shark Advocates International, a new, non-profit initiative dedicated to conserving some of the ocean’s most vulnerable, valuable, and neglected animals – the sharks.

Built on long-term experience and focused expertise, Shark Advocates International (SAI) is poised to be a leader in the battle to protect sharks from overfishing and finning (slicing off a shark’s fins and discarding the body at sea).

“Sharks are among the oceans’ most vulnerable animals and, now -- more than ever -- they need our help,” said Shark Advocates International President, Sonja Fordham, who brings nearly 20 years of shark conservation experience to the new post. “After decades of steady progress, recent months have brought serious setbacks in international shark conservation. Starting immediately, Shark Advocates International will fight to reignite and accelerate progress toward effective shark safeguards.”

The decade from 1995 to 2005 saw the adoption of an United Nations International Plan of Action (IPOA) for Sharks, the first protections for sharks under the Convention on International Trade in Endangered Species (CITES), and the adoption of international finning bans covering most of the globe. Recently, however, progress on the international shark policy front has been disrupted. None of the eight shark species proposed for CITES listing gained such protections by the end of the March 2010 Conference of CITES Parties. Just months before, the International Commission for Conservation of Atlantic Tunas (ICCAT) failed to set catch limits on overfished mako sharks or to close loopholes in the ICCAT finning ban, as proposed by several countries. A new global shark agreement under the Convention on Migratory Species (CMS) offers hope, but has yet to be implemented.

Most sharks are exceptionally susceptible to overfishing due to slow growth, late maturity, and small numbers of young. Lack of shark fishing limits in the face of strong demand for shark fins, meat and liver oil has resulted in serious declines in shark populations around the world. Given that most sharks are top predators, shark depletion can negatively affect entire marine ecosystems.

SAI aims to collaborate with other interest groups, scientists, and governments, to secure international, as well as national and regional policy advances, including:

Stronger finning bans at the US, EU, and international levels

Continued recovery for US Atlantic species, such as spiny dogfish and dusky sharks

EU fishing limits on oceanic shark species, such as makos and threshers

Regional shark conservation plans, as per CMS and the Shark IPOA

“Shark conservation is at a critical juncture and great advances are within our reach,” added Fordham. “While key shark protections have been denied, awareness of the shark’s plight has never been higher. Our team will mobilize diverse coalitions and brave tough policy arenas to defend sound policies and help secure a brighter future for these remarkable animals.”
Posted by Horizon Charters Guadalupe Cage Diving at 5:34 AM No comments:

Some of the best coverage of the ongoing oil disaster in the Gulf can be found at Huff Post. I have been less than thrilled with the major media who, for the most part, have been treating this massive ecological disaster as a "one dimensional talking point memo" featuring vacuous reporters spitting out inane eco bytes.

Enter Jeff Corwin who went hands on for CBS in the Gulf recently to pose questions and cover ongoing research in the region with sharks. Jeff is one of the few reporters who brings home this unfolding disaster in terms that are understandable and immediate (see video).

On a personal note I came close to throwing a brick through the television this am watching a morning show anchor describe the "good news" that thousands of gallons of chemical dispersant was being dropped on the oil so it would sink to the bottom of the ocean rendering the oil "safe."

To put this into perspective. Take your morning coffee. Add a teaspoon of motor oil. Now add a half teaspoon of chemical dispersant. Let sit while these toxic chemicals bind with the motor oil and drop to the bottom of your coffee.

Now drink. No? Thought so.