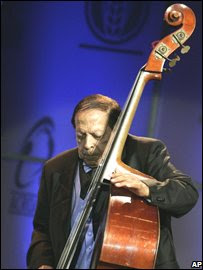 While this has absolutely nothing to to with sharks or shark diving
it is with some sadness that the world lost Israel "Cachao" Lopez this week due to complications from kidney failure.

Who was "Cachao" Lopez?

Cuban-born jazz musician Israel "Cachao" Lopez, credited with inventing the mambo, has died in Miami at the age of 89.

The bassist and composer left Cuba for the US in the early 1960s and continued to perform until his final months. The mambo emerged from his improvisational work with his late brother, multi-instrumentalist Orestes Lopez, in the late 1930s.

A family spokesman said Lopez died with his relatives around him.

He had fallen ill in the past week and died at Coral Gable Hospital, the spokesman added.
Posted by Horizon Charters Guadalupe Cage Diving at 10:14 AM No comments:

It would seem that vacation planning to Mexico is not just limited to Canadians, Europeans and Americans...white sharks love the sun too. Image hat tip DBtechno

Recently released white shark pup from the Monterey Bay Aquarium has made it all the way down the coast to Baja in record time, just six weeks. A similar track was made by a previously released white shark-with the tracking tag coming off the animals side prior to entering the Sea of Cortez.

(03-22) Chronicle -- One of California's best wildlife stories of the year, tracking the coastal adventures of a young great white shark, took a stunning twist in the past week.

The shark was released in February from the Monterey Bay Aquarium and in six weeks has already swum past the southern tip of Baja at Cabo San Lucas and is heading south to the Mexican mainland. That is a distance of roughly 1,200 miles covered in 44 days, according to electronic reports, an average of nearly 27 miles per day - and that's if the shark is swimming in a straight line, an unlikely event. That is the fastest a shark has been documented migrating south from Monterey to Baja, according to the Monterey Bay Aquarium.

This past winter, more than 650,000 people saw the young great white shark during its 162-day stay at the aquarium.

Another twist is that the public can track the shark's position online, where its movements are updated and mapped. Check it out at: las.pfeg.noaa.gov/TOPP_recent/index.html.

Saga of Goldilox: A great white shark tagged by scientists and named "Goldilox" has swum 5,441 miles and is now roaming off, yep, San Francisco, likely looking for something to take a bite out of. They get hungry, you know. Check it out at topp.or

Posted by Horizon Charters Guadalupe Cage Diving at 9:13 AM No comments: