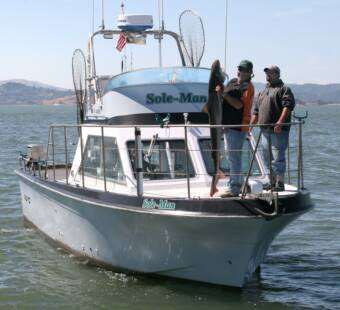 It’s a constant debate as to whether they’re lurking in the Bay. But the definitive answer is yes, yes they are.

Which means: you need to catch them before they catch you.

Behold Sole Man Fishing, a seafaring outfit at the ready for baiting and hooking sharks in the San Francisco Bay, now taking charters out of Fisherman’s Wharf.

Now, if you’re having visions of wrestling gigantic great whites with your bare hands as the sea whips your sturdy craft to and fro, you should know those beasts are rarely seen inside the Golden Gate. But there’s a slew of other prehistoric, big-jawed fish—leopard sharks, giant seven-gills, threshers and soupfins—ready and waiting.

And that’s where Captain Don and his trusty deckhand come into play. You and five of your closest angling buddies can charter a 32-footer with an ample fishing deck, onboard grill and even a heated cabin—and head anywhere between SFO, the Golden Gate Bridge and Vallejo.

The method for shark fishing isn’t all that different from regular fishing, but for the slightly more powerful fight you might have to get it onboard (hint: a bat comes in handy). Nearly eight out of 10 catches will be leopard sharks, with the occasional seven-gill at the end of your line, so with a per-boat limit of three, you’ll have to choose wisely.

But remember, the sharks are probably thinking the same thing.
Posted by Horizon Charters Guadalupe Cage Diving at 6:12 PM No comments:

One of the better concepts for sharks to come along in a while from the fine folks over at GEERG.

This is smart conservation thinking in action and first rate eco branding as well.


Welcome to the Shark Observation Network

The Shark Observation Network (www.sharksonline.net) is a partnership of the Greenland Shark and Elasmobranch Education and Research Group (GEERG), the Shark Research Institute (SRI), and the BIOAPP.

The network supports the collection and organisation of data as well as the development and dissemination of information concerning the state of shark and elasmobranch populations and their worldwide distribution.

The information serves to support environmental awareness, assessment and policy making, and public participation at a global level. You can help us by reporting your own shark observations on a regular basis. This service is free and it is accessible to the general public at all times: www.sharksonline.net

If you would like to add an observation for a species that is not yet listed, please contact us and we will create a new file.

Go to the photo upload page if you like to make a contribution.
Posted by Horizon Charters Guadalupe Cage Diving at 1:33 PM No comments: