Bimini Bull Run Video - Getting to Know The Locals 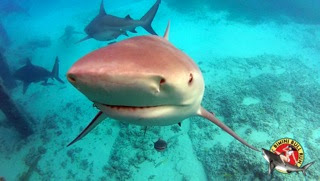 Meanwhile the hard working crew over at Bimini Bull Run are spending the next few weeks getting to know the locals or Bull Sharks at their all new marina based cage dive operation.

It's a tough job but someone has to do it.

Fortunately they have Martin and Carson on site every day. Martin is none other than Martin Graf who has, for the past decade, been head of diver operations for Shark Diver, today he runs the whole company, that's when he's not at Bimini Bull Run in the Bahamas enjoying the sun, sand, sharks and locals.

These big animals have come to call the Bimini Big Game Club home for the past 60 years, eating fish scraps from fishermen as they return each day from offshore adventures. The team at BBR have created a 'locked down site' in ten feet of water where divers and animals can interact safely allowing even those with no dive certification a first hand glimps into the wonderful world of sharks.

Today's visibility was not the best, in fact this is about as bad as it gets, but it was some quality time taken to introduce the animals to the shark cage and cameras getting everyone into a routine that will remain the same for years to come which is the basis of any lasting shark program.

Welcome to the sharks of Bimini Bull Run video here.

About Shark Diver. As a global leader in commercial shark diving and conservation initiatives Shark Diver has spent the past decade engaged for sharks around the world. Our blog highlights all aspects of both of these dynamic and shifting worlds. You can reach us directly at sharkcrew@gmail.com.
Posted by Horizon Charters Guadalupe Cage Diving at 6:57 PM No comments:

The issues are not as cut and dry as one might imagine (no pun intended...well yes, there's some pun, about 20%). It is very easy to stand on a Facebook soapbox and cry foul when it comes to sharks.

Lord knows there's millions of petition folks about, but like any complex animal trade issue involving cultures, countries, and economic scales balance and nuance must play into viable solutions.

Of course we just used about six words your average shark conservationist, who fervently believe that blonde swimsuit models or head gear challenged divers, the ones who egregiously molest sharks for their own Facebook "like' number count, have no idea of their meaning. For example the words "viable" and "solution,"...pressing on, there are a few who actually think about these things and write about them too.

Da Shark has some thoughts on this and we'll let him play the Judas Conservationist with this issue because he's waaay ahead of the curve with his solutions and we find ourselves agreeing with them because they contain balance and nuance. Two additional words sadly left out of the Big Book of Shark Conservation these days while folks run off on moronic tangents trying to shoe horn the concept of an upside down Tonic Tiger Shark into some kind of broader conservation meaning.

Without videos like these the conservation movement for sharks would devolve into crudely drawn images on bathroom stalls and shit smeared bumper stickers slogans, wait, that has already happened, thanks to a small group of absolute twits who happen to exhibit a modicum of media savvy - oh and you know who you are, unfortunately we all do.

Sharks these days are running a gauntlet, at sea it's hooks and we can all agree that's bad news, in shore it's idiots with Kardashian sized egos, cameras, and a compliant media who lionize stupid pet tricks with sharks.

Anyway, this is the mainline to good conservation messaging, enjoy:


About Shark Diver. As a global leader in commercial shark diving and conservation initiatives Shark Diver has spent the past decade engaged for sharks around the world. Our blog highlights all aspects of both of these dynamic and shifting worlds. You can reach us directly at sharkcrew@gmail.com.
Posted by Horizon Charters Guadalupe Cage Diving at 3:35 PM No comments: