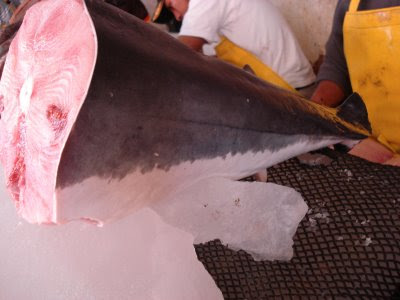 Peter Thomas has full coverage of the white shark recently released from Monterey Bay AQ only to be caught and killed off the coast of Ensenada, Mexico.

A blow to tagged shark research and a follow up to our own investigations of the Ensenada fish market where, over the past 5 years, we have been documenting the take of juvenile whites sold as swordfish here for 60-100 pesos a kilo.

A young great white shark that was released after 69 days of captivity at Monterey Bay Aquarium has died in a commercial fisherman's net off Ensenada, Mexico.

Scientists had tagged the female shark and were following its movements after its release last November. They became concerned recently when a tag attached to the shark's dorsal fin revealed movements over land.

Oscar Sosa-Nishizaki, a Mexican researcher, traced the movements to the home of a fisherman who acknowledged catching the shark in his gill-net.

Donsol Shark Tourism - Too Much of a Good Thing?

One of the travel blogs we follow is Contemporary Nomad. A spicy mix of first person global trekking, cultures, and commentary. Recently Tony was in Donsol for his first whale shark encounter and poses the question, "Is this too much of a good thing?"

"One insane woman actually grabbed on to my swimsuit and apparently thought I would drag her along for a free ride. She probably got the idea from the remora fish which latch onto the sides of the whale sharks. Without getting graphic, let’s just say she won’t ever do that again."

His first person report is interesting and a great read.