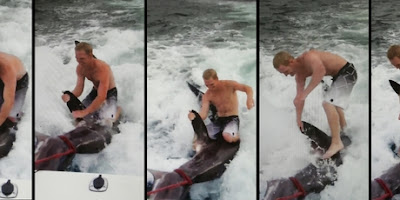 We have to admit when we saw the Facebook video coming out of New Zealand featuring beer swilling locals surfing a dead shark our impression of NZ shark conservation dropped another notch.

While global sharkies went to town in a series of cascading outrages, petitions and angry chatter they missed the mark - completely.

New Zealand is one of the few Western countries left on the planet that not only allows shark finning, it has set and growing quotas for it. New Zealand is a main purveyor of legal shark fins to the Asian market.

And where is the shark army for that stunning fact? They all know it, and yet NZ seems to inhabit and strange and bizarre bubble of indifference when it comes to outrage against shark fins.

Four years ago we posted, When One Dead Shark Helps a Species, the idea that one dead shark could help turn public opinion. For the hundreds of thousands of dead sharks that get finned each and every year in NZ as part of a draconian quota system, the outrage over this dead shark was hollow, shallow, and completely misguided.

We all want shark finning to end, and yet the lowest hanging fruit of this effort, a western government adding metric tons of shark fin legally to the system remains untouched and unchampioned by the wider shark conservation world while they chase after shadow boats and shark finning in the remotest places on the planet.

Shark conservationists in New Zealand rage at images of dead shark in Japan while the same images, sanitized, legalized, and part of a fisheries profit machine get little to no mention at all.

Because there are no images.These same finned animals, these same quotas, go by the wayside.

New Zealand needs to wake up to shark fin in their own backyard.

The global shark conservation machine needs to wake up to this as well because the outrage over some misguided locals and one shark is a joke, because somewhere in a glass jar at $350 a kilo are the fins of New Zealands legal system. And somewhere in a dusty warehouse are the thousands and thousands of bags of these same fins that say "Fisheries New Zealand" on the side.

We would like to see pictures of those one of these days. It would be a good first start.

More from GrindTV.
Posted by Horizon Charters Guadalupe Cage Diving at 8:41 AM 4 comments: