There are shark research websites and then there's the Maldives Whale Shark Research Programme website.

Perhaps one of the most exciting and well conceived shark research websites we have come across in the past year - even though it's still in development.

This is how you do online shark conservation messaging and web outreach. Simply gorgeous shark images tell the story while up to date news and reports keep interested media and the public informed and engaged.

We are also not surprised to see this program as a member site to the Shark Alliance, kudos.

The whale shark - the largest fish on our planet. Despite their great size very little is known about these colossal fish. We know they swim the oceans, potentially covering vast distances, eating only plankton, tiny fish and squid; but questions like how long they live or where they reproduce still remain unanswered.
Posted by Horizon Charters Guadalupe Cage Diving at 7:44 PM 2 comments: 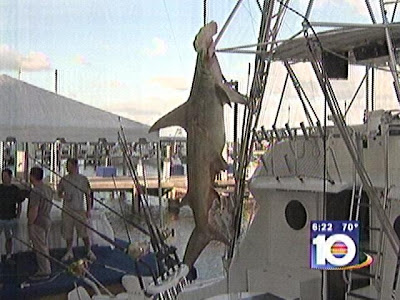 With the news of a 16 foot Great Hammerhead caught and killed off the Miami coast yesterday we thought this would be a good opportunity to look into the state of Florida's tourism.

Florida Tourism by the Numbers

57 Billion - The economic impact of tourism in Florida

Florida needs tourism dollars. The state is in free fall with sharply declining tax revenue, the housing debacle, and in some regions of Florida a shocking10% unemployment rate. It is time for Florida to reevaluate every tourism option they have and that includes shark tourism.

We have been harping on this for a while now. Since the ill fated decision in 2001 to ban shark diving in Florida's waters millions of tourism dollars have gone to places like Bahamas where divers enjoy safe encounters with sharks. Shark tourism, done right, could be plugged into Florida's existing scuba community to begin major tourism revenue generation in one year or less.

Those numbers include hotels, airlines, taxi's, restaurants, time shares, the economy. Since 2001 the state of commercial shark diving worldwide has "matured". With the proper protocols in place, oversight, and even stiff fines for operations that fail to follow shark protocol Florida could become a world leader in safe shark encounters drawing tourists from all over the planet.

One final number to consider - 200 million. The estimated value of commercial shark diving worldwide and growing. In countries like the Maldives, shark tourism already accounts for 2.1 million dollars in tourism revenue, an estimated 100 times more than the export value of shark meat from the region.

Looking at the Great Hammerhead caught yesterday by one tourist from Illinois it becomes elemental to estimate the ongoing value of that animal just as easily. Unfortunately for the struggling hotels, restaurants, and unemployed in the Miami region the only value they will ever see from that shark is on the Channel 6 news archives.