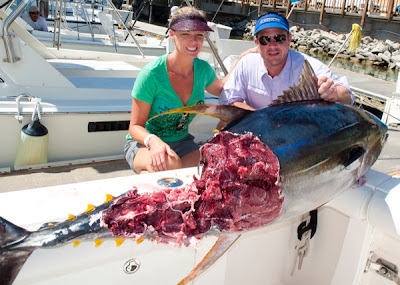 Pete Thomas has the scoop on a 300 pound sushi shark buffet in Cabo this week.

Seeing shark "on predation" is perhaps one of the most awe inspiring moments you can witness, for Tyson Seeliger of Houston, Texas, aboard the Great Escape Jr, this event was one of a kind.

"This tuna never dove but stayed up on the surface the whole time," Tracy Ehrenberg, the Pisces general manager, said in a report posted on the company blog. "After another two hours they had the fish 20 feet from the boat, when it was attacked by four pilot [or silky] sharks. They ripped into it, devouring it in large bites, as Tyson frantically reeled as fast as he could to try to save his sushi."
Posted by Horizon Charters Guadalupe Cage Diving at 3:08 PM No comments: