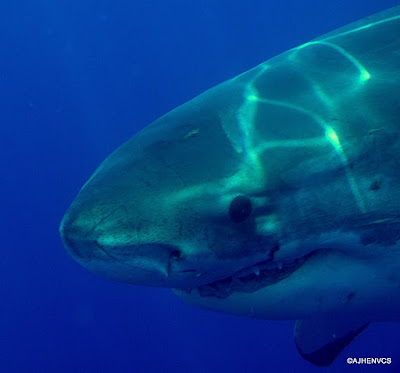 That Travel Chick aka Fort Lauderdale's Amanda joined us at Guadalupe Island in 2010 for the ultimate shark encounter. This is Part Three in her ongoing series diving with great whites and Shark Diver.

I wake up before the butt crack of dawn. We have arrived at Guadalupe islands at 330am. I am up at 5am. I get to watch them put the cages in, the sun come up sorta and have a light breakfast of a bagel. I am anxious to get in the water but first we have to get our safety study course as well as tell us who our cell mates are and what rotation we are on.

My cell mates are Souxie, my roommate, and Brian Taylor who is in the Air Force. He is an airplane maintenance guy who is stationed in Korea and hopes to move back to the states with the next shift. I’m excited to have these 2 with me. The first shark sighting was at 733am. It’s very exciting to hear the crew yelling ‘SHAAAAAAAARK”…. Everyone runs to one side of the boat and then to the other to see him pop out. Our shift finally starts at 10am where we are on first rotation.. woohoo. SCORE. It normally starts at 8am but we had to get the dos and don’t of the cage and such. I’m last in and get a run down of what to do. They first of all weigh you down with at least 40lbs of weight since you want to sink not float, wear a 7mm suit with hoodies and booties. Water is still freaking cold with it all on.

We get in and almost instantly see a shark. We saw up to 4 at one time. A sea lion was literally playing TAG with the shark. Quite amusing. I guess element of surprise gig is up and they aren’t a meal know. It was quite funny to see them both interacting with each other. Lots of tuna which just made me want sushi. We had the sharks swimming so close to the cage. I even had a chance to stare down Jacques right into the eye and see his blue outer ring. Great whites have blue eyes. I never knew that. Maybe we are related. Hehehehe… I can be an apex predator. Well ok maybe not. The first time seeing a Great white I thought I would feel a bit scared but instead I felt peacefulness and calm. No adrenaline pumping. It was just breath-taking. They move so gracefully through the water and are cruising. Nothing menacing about them. They didn’t come up close to the cage till next time when Dottie was around as she was all up in the cage’s space. Jacques also was quite comfortable being around the cage. I only felt a little uncomfortable with the regulator. Luckily Martin, the dive master, was there to instruct me and give me a refresher. I am so used to snorkeling now.

The hour just seemed to fly by. It was terrific that we got to go in the first shift. Getting out with the massive amounts of weights was tricky but doable. The time out of the water was mostly spent on the sun deck passed out till you hear “15 minutes to next rotation”. We instantly jump up and head on down to try and squeeze into our wetsuits. I tend to put on suit juice so I can slide ride in. Each time we were in, we saw no less than 2 sharks. As the day went on the viz went down and so did the quantity of time the sharks spent with us. The water was freezing to me but as soon as those sharks start coming by and you lock eyes with them, all that rocking and freezing water in my suit goes away. It truly is the most amazing feeling I’ve ever had with an animal. It’s everything I could have dreamed of and more.

We even had the opportunity to see a sea lion that would frolic and even swim up next to the shark. It seemed to be a pretty decent size which means that it’s older and knows what it can and can’t get away with. It was really quite amazing to see it interact and somewhat harass him.

At the end of the day Martin takes in all the photos and helps identify all those that we have seen. Turns out we have seen 12. All of which he could identify easily. 2 of which hasn’t been seen since 2007 and 2008. It’s nice to know that they come back. Though not once did any of the sharks of a transmitter from the show The Great White Expedition which as it turns out has been going on since 2002. I did not know that.

Another in an excellent series by the fine folks over at SFS last week:

Continuing the discussion about shark feeding dives started last week by Aleks Maljkovic, Eric Clua discusses the economics of this practice and concludes that a living shark can be worth much more than a dead shark.