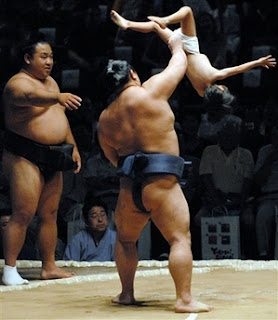 Known in Japan as the "Can Crusher" Mr. Asashoryu is currently defending himself on two charges of child endangerment after issuing a similar challenge to Tokyo's Boy Scouts Troop No.14 for the right to sell cookies door to door. He went undefeated in 16 matches against the troop leaving some with broken bones.

Paul Watson is currently chasing elements of Japans whaling fleet in the waters of Antarctica, where two of his crew members are being held as "hostages" on board Japanese vessel Yushin Maru No. 2.

"We will decide the fate of these two crew members and the future of Japans whale hunt in the ring of honor" Yokozuna shouted to a sold out crowd of fans at Tokyo's Staples Arena.

Japans Foreign Minister, Masahiko Kōmura, has agreed with the challenge saying "Mr.Watson should join us here in Tokyo rather than attempt to interrupt our Glorious Imperial...ahem...peaceful whaling fleet in Antarctica".

This current underwater Onion was brought to you by Shark Diver. The news just keeps getting stranger.

Posted by Horizon Charters Guadalupe Cage Diving at 8:53 AM No comments:

Who even knew Australia had a navy?

Turns out they do and today they sent the good ship Oceanic Viking to the rescue of two protesters from Sea Shepherd who are being "held hostage" on board a Japanese whale ship.

CNN--Australia has sent a customs ship to retrieve two activists who were seized by a Japanese whaling vessel, the country's foreign minister said. The transfer, if successful, would end a tense two-day standoff in Antarctic waters.The Australian ship, the Oceanic Viking, was within sighting distance of the Japanese whaler Thursday.

So that just leaves us with one question: What Now?

Japans whaling fleet is on target to harvest 1000 whales this year, thus far they have only taken an estimated 300. Regardless of this "hostage drama" side event which has all the earmarks of a classic "don't taze me bro" moment, the question remains, how to stop another 700 whales from being slaughtered this year?

As always we'll keep you updated.
Posted by Horizon Charters Guadalupe Cage Diving at 8:16 AM 1 comment: