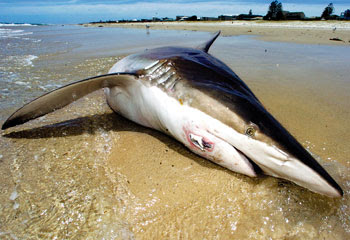 Responding to a recent tsunami of bad shark press in Australia, South Africa, and elsewhere this month, writer Linley Boniface takes on the issue of sharks and the media:

I never thought I'd say this, but I am bored with sharks. This summer, it has been impossible to open a newspaper or turn on the TV without being subjected to yet another daring shark escape story.

On closer inspection, these yarns have invariably turned out to involve nothing more thrilling than an exceptionally timorous surfer paddling for safety after spotting a fishy shadow pottering quietly along the shoreline, minding its own business.

While sharks in Australia do, as the Australians rather wonderfully say, "take" the occasional swimmer, Kiwi sharks are about as predatory as a newborn ladybug. Occasionally, a shark will accidentally graze a surfer's calf with a tooth, while yawning: cue national panic and the mass closure of beaches.

Silliest of the many absurd shark reports the media has pestered us with this summer was one from Radio New Zealand. The national broadcaster quoted Constable John Paul Tremain as urging people to stay away from beaches near Dunedin because a large shark had allegedly chased a couple of surfers from the water.

RNZ said Constable Tremain did not know the "exact size or breed of shark" - terrifying news in itself; someone is breeding the things! - but was convinced it was "lurking with intent".

Lurking with intent? Intent to do what? The sea is where sharks live: sharks no more lurk in the sea than I lurk in my house.

Posted by Horizon Charters Guadalupe Cage Diving at 10:42 AM 1 comment: 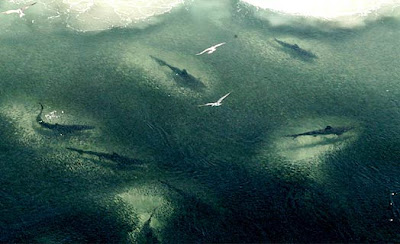 It's a commercial shark diving industry sore point we have harped on for a while now.

The ban on chumming and shark diving in Florida waters was poorly conceived back in 2001. This complete ban was conducted under a negative media storm by a well organized anti-shark diving lobby.

At the time a nascent US shark diving industry was comprised of just two operations.

Today Florida's waters teem with commercial shark diving species. An estimated 10-20 million dollar tourism industry sits idle as hotels and restaurants across the region shut down under one of the worst recessions in recent history.

Meanwhile, Florida's sharks are relegated to weekly news reports that do little to dispel the Jaws mythos with recent titles like "Shark Frenzy Caught on Tape" and the ever popular "Shark Alert". The state of Florida's-state of sharks-is at an all time low with an ever present perception that the waters of Florida are filled with rapacious predators waiting to strike.

The reality could be further from the truth and only the commercial shark diving industry can, if given a chance, work to dispel that media fabrication about sharks.

It is high time Florida reconsidered commercial shark diving operations off it's waters. Done right, with serious and lasting species interactive protocols, and even the threat of fines for industry infractions, Florida could ramp up a shark diving industry in less then two years that would feed local communities desperately needed tourism dollars.

If the ban on shark diving in Florida was in part done to stop the fear of shark attacks on humans, we would suggest the bans goals have failed. It is time to rethink sharks in Florida.
Posted by Horizon Charters Guadalupe Cage Diving at 10:05 AM No comments: 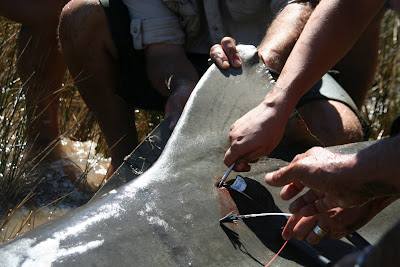 An excited team with the South African Shark Conservancy caught what is now the largest Bull Shark on record in South Africa.

In a scene worthy of any action film, team members were towed 2 189km up the Breede River before the critter became tired enough to load up with tags and release:

Long-standing fishermen's tales of huge Zambezi sharks in the Breede River have been confirmed - and huge means just that.

Last week, researchers on an expedition to confirm the presence of this species - also known as bull sharks - not only caught one of these sharks, but the catch proved to be a world record at 4m (13 feet) and weighing more than half a ton.

1.This Zambezi shark - who we have named Nyami Nyami (the Zambezi River god) is the largest of its kind known to science, measuring 4 metres total length. The previous known maximum length for this species was 3.4-3.5 metres;

2.The discovery of Nyami Nyami represents a significant range extension for Zambezi sharks in South Africa, as they were only known to occur to Cape St. Francis in the Eastern Cape;

3. Nyami Nyami appeared heavily pregnant, suggesting the Breede River may serve as an important nursery ground for these sharks.

Editors Note: The tracking data coming back from this female is invaluable to the understanding of this species behaviour. Needless to say you do not want to be a fisherman in that region...or do you?
Posted by Horizon Charters Guadalupe Cage Diving at 7:39 AM 2 comments: