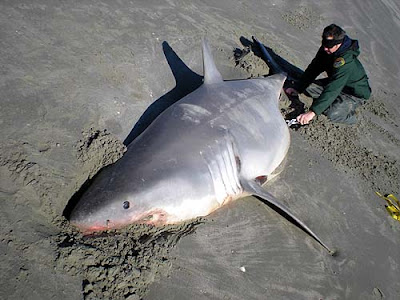 Off all the white sharks we covered this year washed up on remote shores nothing compares with the one that washed up in the Bahamas this summer.

Except, perhaps, this 13 foot female in the Carolinas this week:

The body of a great white shark, one of the ocean's rarest and most powerful apex predators, was discovered last week washed ashore on Morris Island.

What killed the 13-foot, 2-inch female shark remains a mystery, though biologists are hoping that examination of tissue samples might shed some light on how the animal wound up dead on the beach, said Bryan Frazier, biologist with the S.C. Department of Natural Resources.

The shark did not appear to have suffered any fishing-related wounds, nor had it suffered any obvious forms of trauma, Frazier said. And though enormous by most standards, the fish actually was still quite young, at an estimated 10 to 13 years old, Frazier said.