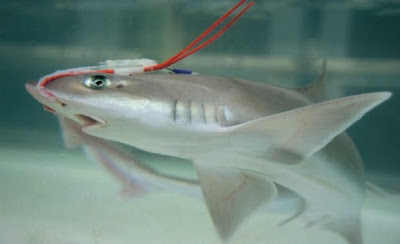 A new study released in the Journal of Animal Ecology this week from the Florida Museum of Natural History reveals that some shark species can pinpoint navigate long distances.

US ecologists analysed data from eight tiger sharks, nine blacktip reef sharks and 15 threshers which had been tagged with trackers and released off Hawaii, Palmyra atoll in the Pacific or southern California before being followed for between seven and 72 hours.

5. There were inter- and intraspecific differences in path structure and patch size, although most individuals showed scale-dependent movements. Furthermore, some individuals of each species performed movements similar to a correlated random walk.

Posted by Horizon Charters Guadalupe Cage Diving at 7:49 AM No comments: