End of era for Florida Sawfish? 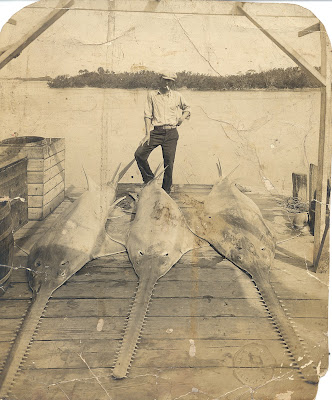 As Florida continues to disregard sharks as little more than raw product a new alarm has been sounded at the state of Florida's Sawfish population.

Once, one of the worlds healthiest populations, back in the 1920's and 30's today this rare and unique critter is all but vanishing from the coasts:

"Sawfish are disappearing all over the world for basically the same reason, which is that their big saws snag very easily in fishing nets, they have become despised as net wreckers because obviously a fisherman doesn't like getting one in his net. So over the years most sawfish that were captured were killed."

Editors Note: As we have mentioned Florida's continued ban on shark diving activities changes the value of sharks and rays in Florida's waters. Without safe commercial shark diving operations who see sharks as a sustainable and valuable resource-the value of sharks and rays is degraded to fishermen and one time use of these species.
Posted by Horizon Charters Guadalupe Cage Diving at 8:06 AM No comments: