Hillary Clinton on China- Trust me, it relates to sharks 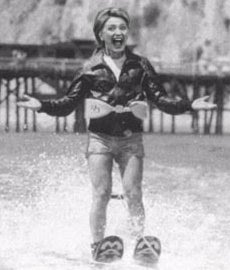 She said that while human rights issues are important:

"our pressing on those issues can't interfere with the global economic crisis, the global climate change crisis, and the security crisis"

In other words, the Obama government and the Clinton state department aren't going to pressure China on human rights issues because doing so will interfere from more important things, like the global financial meltdown.

While I don't necessarily disagree with this statement, if you read between the lines it's bad news for the shark conservation community.

As most of you know, China is the largest market for shark fin soup, an industry that kills (by some estimates) as many as 100 million sharks a year(many, including the shark diver, question the validity of this number, but at the very least we're talking about a LOT of sharks). It's one of the least sustainable fisheries in the history of the planet, and there's little that can stop it other than direct pressure from the U.S. Government.

If the Obama government isn't willing to pressure China about how they're treating PEOPLE.... there's very little chance of pressuring them about how they treat SHARKS.

The shark diver recently wrote a post about how the economic crisis means fewer humans killed by sharks... but it may mean more sharks killed by humans.

Hello, everyone, and thanks to the Shark Diver for the wonderful introduction!

As a marine biologist, I will try to provide a scientific perspective on the shark world. As stated in my introduction, though, I am also an ardent conservationist and a SCUBA diver, so there is very little in the shark world that I won't comment on. My specific research deals with the food chain relationships of the sandbar shark along the Southeastern United States, and I've worked in the past on the electrosensory system of small Outer Banks stingrays.

I'll post something more substantial in the coming days, but I wanted to alert the shark diving industry crowd to an ethical debate taking place on my other blog (Southern Fried Science). It deals with the ethics of shark diving itself. Please find it here, and check the blog often!

Thanks, everyone, and I look forward to many interesting discussions about sharks in the future.

-David
Posted by WhySharksMatter at 6:29 PM No comments:

Along with son Andrew, the Foxes have remained stand alone industry leaders to shark conservation efforts and the perception of sharks in general. Their operation remains a template for doing things right with big predatory animals.

Some excerpts from the article:

When people come out with us, we make an effort to calm it down to a sort of spiritual, eco-tourism experience. Everybody wants to see sharks jumping up in the air, smashing into the cages, biting the platform, breaking teeth. 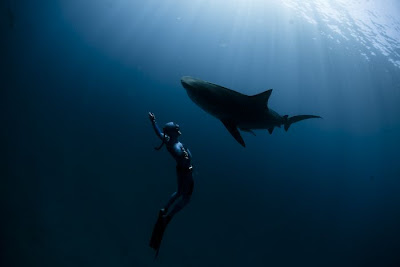 Frederic Buyle's underwater images of man and shark continue to appear around the Internet like rare found jewels. This is simply a great series of images.

His latest set can be found at the blog of Daan Verhoeven. If you can get past Daans "messianic vision" towards large predatory sharks and comments like these:

"Notice how her eyes seem to have the slight squint of pleasure?"

This photo set and the remainder of his observations are pure shark. Daan even coined a new term we kind of like for those who play with sharks, "Sharkitarian".
Posted by Horizon Charters Guadalupe Cage Diving at 12:01 PM No comments: 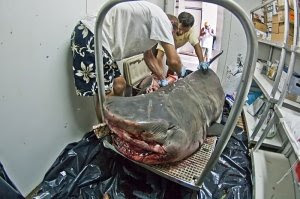 From the shark research blog of Johann Mourier yesterday news of a dead Tiger in Teahupoo. Original story broke on the Shark-l and The Shark Group:

As a PhD student at CRIOBE studying sharks in French Polynesia, the Fisheries Authorities contacted me to informe us that the tiger shark was caugth . At first they said that it was a pregnant female with pups that started to go out of the body.

When we arrived we saw that it was a male. The babies that saw was the 2 claspers. This male was exactly 3.6 m long but we didn’t have the material to weigth the shark. But I think it could weigth about 500kg. We took DNA samples and we opened the body to have a look at the stomack both for stomack contents and parasite analysis.

The stomack was almost empty. It only contained some vertabrae that should belong to small shark or fish, and some fibres that we think could be whalebone plates of small cetacean.