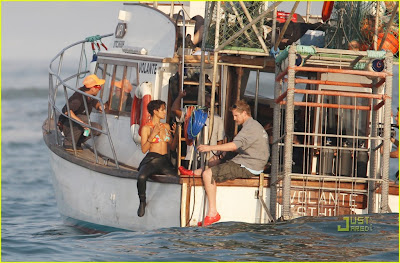 The films called Dark Tide. It stars Halle Berry as a shark diver supposedly at Isla Guadalupe, but the entire shoot is happening in South Africa, or is it?

Sara (Halle Berry) is a modern-day adventurer, deeply drawn to close encounters with the magnificent White Sharks who rule the primal predator shore of isolated Guadalupe island. When her husband chooses ambition over his wife's safety in a split second encounter with the jaws of death, her marriage nearly breaks apart.

A year later, a monsoon season voyage back to the same island becomes an escalating series of terrifying underwater confrontations and gut-wrenching emotional challenges. Testing her courage in the face of nature's ultimate terror, she shows herself as tough as the men she is attracted to; and perhaps bravest of all Sara endures and changes the terms of the contest with mankind's most feared underwater predator.

Alison Kock, a Save Our Seas Foundation shark conservationist near Simon's
Town, where the scenes were shot, told the Daily Mail: "After reading the
script we decided it was not something we would like to put our names to.

"Our mandate is to try to change people's perceptions of sharks. The first
script that we got sounded very much like it had a thriller aspect to it and
a personal kind of aspect to it as well.

"But fighting off a shark, or surviving a shark attack - we couldn't see the
positive side of that, as much as we tried."

Yes, it has been a while since we poked at the increasingly irrelevant and bloated Sea Shepherd Conservation Society. Mainly due to the fact that poking at a dead conservation corpse is about as much fun as...well poking at a corpse.

One story that did get our attention this week was SSCS sudden reversal from the use of C4H8O2.

As a mainstay in the SSCS arsenal of moronic direct action tools, Paul Watson and company have touted the use of Butyric acid as it's direct action darling. Where Greenpeace were afraid to go SSCS would step boldly - Direct Action!

So why the sudden and very public reversal/spin on the use of C4H8O2?

This is a question best left for those that follow this org religiously (we happen to love this guy) and one we'll leave to the SSCS experts to debate long after this non profit (?) has disbanded.

With SSCS now out of anything media worthy to hurl at Japanese whalers, we would like to offer the following instructional video on how to taunt your conservation opponent. Sadly whales will be killed once again during the 2011 Antarctic research hunt, and once again Sea Shepherd's reality television show will be there to...well, we're not sure what they will be there to do, but the following video might help the Shepherds in their ongoing Whale War - now in season number four with the highest ratings to date!

Posted by Horizon Charters Guadalupe Cage Diving at 9:00 AM No comments:

Shark Image of the Week 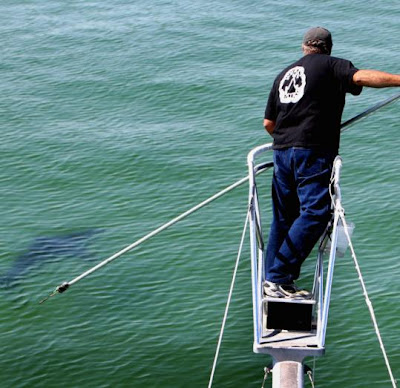 Off the coast of Massachusetts it's white shark tagging season and apparently the "hunting" is good.

“It’s a team effort. We’re all equally important — not one guy better than the other,’’ said Chaprales, 58, of Marstons Mills, who was a commercial fisherman for 40 years off Cape Cod and claims a perfect record tagging fish with his harpoon. “Greg’s the biologist, my son drives the boat, I do the tagging, and George does the flying.’’

And with more and more great whites appearing off the Cape, these three men from different walks of life have the unique opportunity to unmask one the region’s most mystifying species.

“This has nothing to do with the public, nothing to do with seals; it really has to do with advancing science,’’ said Skomal, 48, a state biologist from Marion. “There’s nobody else along the East Coast of the United States who has the opportunity to do this.’’

Posted by Horizon Charters Guadalupe Cage Diving at 8:43 AM No comments: 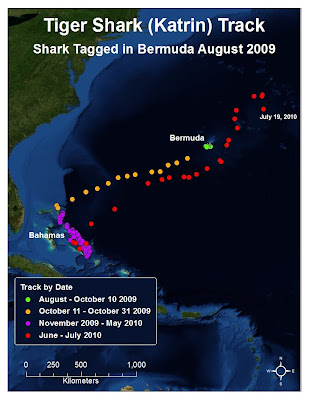 Thanks to the Guy Harvey Foundation and tagging work being done in Bermuda through the invitation of veterinarian Dr. Neil Burnie, who has independently running a tiger shark research effort, the once elusive world of Bahamas tiger sharks is opening up.

Or are they Bermudas tigers?

Recent tagging data is showing a migration pattern that is interesting to say the least.

For the past decade the question of where these animals vanished to periodically was on commercial shark diving operators minds in the region.

Last year Guy Harvey's Dr. Mahmood Shivji, and company decided to find out. They reported back with an in depth discussion on conservation, marine protected areas, and current tagging with Dr. Neil.

Last month a tiger was sport caught in Bermuda setting off a storm of controversy, tigers are also sport caught with relative impunity in Bahamian waters as well.

With this latest data interesting questions about protection for these animals comes up. As commercial shark diving operators ourselves we have long advocated and enabled in depth shark research at the primary dive sites we operate in. Understanding the animals we work with is the key to working with the resource beyond just the commercial which leads to greater protections backed by in depth site data.

Local efforts to shepherd and steward sharks is the hallmark of commercial shark diving in many places worldwide. Kudos to the work being done by Dr.Neil, Guy Harvey, Dr. Mahmood, and others who are in a race to uncover the once secretive world of tigers.

Only good things can come of this latest discovery.
Posted by Horizon Charters Guadalupe Cage Diving at 8:09 AM No comments: