All of England is in an uproar today as photographic evidence, perhaps the first of it's kind, has surfaced of a possible Great White shark (a huge animal) taking a bite out of a seal.

The Sun-A JAWS hunt was on last night after experts confirmed a mutilated seal was killed by a bite from a giant shark.

Scientists say razor-sharp tooth marks show the adult grey seal — a favourite food of great whites — had been mauled in a frenzied feeding session. Experts confirmed the seal was killed by a giant shark after studying close-up photos of the wound.

“It is a very clean cut, and from the size of the chunk, and the serrated tooth marks, it must be something with a very large bite radius like a great white. “The position of the bite mark is also crucial. The seal was bitten from underneath, which is exactly what you would expect because of how a shark takes its prey.”

This is a video from Isla Guadalupe shot in 2007 of a Great White feeding on a 700lb Elephant Seal. From this video it is possible that the seal attacked in the U.K was in fact a Great White, then again, it might be an Orca, or just a fake. Only time will tell: 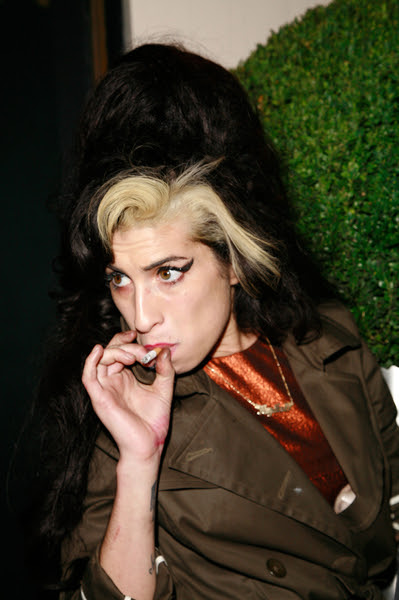 "If it swims-it wins" is our motto here at Underwater Thrills. That was until today.

Coursing through the Internet right now is this little story about Rocks Bad Gal-Amy Winehouse, who according to the tabloids is now claiming to have been "Saved by Scuba". Well glory be!

Three things that are wrong with this off the bat:

Amy is quoted as saying (add slurry British voice here) "I’ve learn't to appreciate the simple things, like the beauty of nature. And it’s taught me to face my fears. It’s a different world down there. I can look at things in a new way. “I’ve come to the realization that life is too short; I want to make sure I live every minute of it."

All this after spending the holidays with fellow rocker Byan Adams underwater in Caribbean.

Perhaps she discovered the joys of being NARC'd as a little trip over to the SCUBA-WIKI describes NARC'd as:

"Due to its perception-altering effects, the onset of nitrogen narcosis is famously described as the "rapture of the deep" the result of illogical behaviour in a wet environment or in extreme cases-really stoned"

Perhaps this latest video of her in action on the surface might give you an idea of why we become concerned for her well being sub-surface: