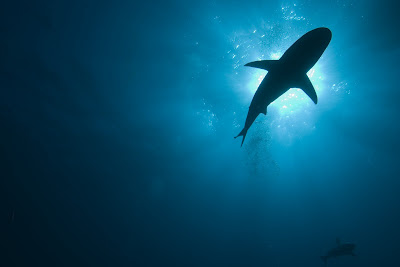 Bad shark related news from Mexico yesterday as yet another surfer shark attack and death was reported. This time less then 6 miles from a previous fatal attack and death of an American last month.

Incredibly, as we were blogging about that attack, another surfer was attacked in the same area. While environmentalists managed to stave off an all out shark hunt last month up and down the coast...this time we're not so sure they'll be as effective.

ACAPULCO, Mexico -- A shark injured a 49-year-old American surfer Saturday off the Pacific coast of Mexico, in the third attack in a month.

The Mexican Navy deployed personnel to warn people about sharks at beaches in Zihuatanejo, a resort northwest of Acapulco, according to a Navy official who spoke on condition of anonymity because he was not authorized to release the information.

He said authorities have not closed beaches in Zihuatanejo, but people were being advised against swimming. A day earlier (Friday), a 21-year-old Mexican surfer was killed by a shark off a nearby beach. The two attacks came a month after a shark killed a San Francisco man surfing in the same area.

Local Civil Protection director Jaime Vazquez Sobreira said the American attacked Saturday lost his thumb but managed to get to a hospital on his own and was in stable condition. The Guerrero state Public Safety Department identified the man as Bruce Greems but did not give his hometown in the U.S. Vazquez Sobreira said he lived in Zihuatanejo. The U.S. Embassy confirmed an American had been bitten by a shark but did not have additional information.

Mexican authorities used baited hooks to catch sharks last month after the attack that killed 24-year-old Adrian Ruiz of San Francisco. Local conservationists protested the hunt, and it was not immediately clear if authorities would do it again.

"We need scientific explanations for the shark presence, and if it's because of climate changes," he said.

Cold currents and an abundance of giant squid and other prey may be attracting sharks to the area, said Jose Leonardo Castillo Geniz, a shark expert with the National Fishing Institute. He said a large shark presence was unusual for the region.

Geniz said the authorities should close beaches in Zihuatanejo instead of killing sharks. He also called for aerial surveys to determine what species has been attacking surfers. Aida Navarro, of the environmental group Costasalvaje, urged the government to post warning signs at Zihuatanejo's beaches.

"Killing sharks is not the solution to preventing encounters with humans," Navarro said. She noted that some shark species are under threat from overfishing.