From the Underwater Times News Service your definitive online source for all things "ocean":

SARASOTA, Florida -- Mote scientists spent Thursday using side-scan sonar in an effort to find a scientific robot that has been missing since Monday, Aug. 31, 2009. Now we're seeking the public's help for the safe return of the robot nicknamed "Waldo." (Yes, after that Waldo!)

The robot - an autonomous underwater vehicle or AUV for short - had been patrolling the waters off Southwest Florida for five days looking for signs of red tide. The robot is equipped with a BreveBusterTM, a device designed and built by Mote scientist Dr. Gary Kirkpatrick that can automatically detect the presence of red tide in the water.

The AUVs are designed to glide up and down and forward through the water, sending signals to satellites each time they surface. Waldo was tooling along offshore from Venice just fine, making reports every two hours between Aug. 26 and 31.

"Then, bam, it just stopped sending a signal," Kirkpatrick said. "There are a few possibilities that we think are likely: It could have had a major leak or malfunction and sank to the bottom and is just sitting there. Or, it could have had a malfunction with its computer or its communication system and is floating on the surface but unable to tell us that it's there."

Posted by Horizon Charters Guadalupe Cage Diving at 11:44 AM No comments: 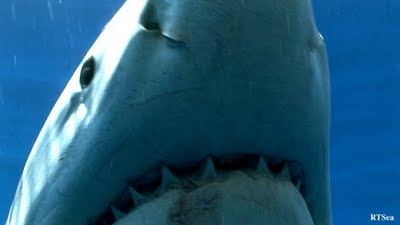 We would like to introduce you to one of those home runs today from The Noble Savage Blog.

When rare shark attacks happen "shark experts" flock to the media scene like first year lawyers to a train wreck:

A story surfaced yesterday on San Diego’s 10News.com about a woman who was bitten by what might have been a small great white shark while she was swimming off Terramar Beach in Carslbad. The woman, named Bethany Edmund, said the shark first went for her foot, and then bit her three more times on her calf and feet. Edmund was swimming in about 10 feet of water, and at first thought she had kicked a reef. She apparently never saw the shark, and blamed her friends for grabbing her feet.

After the last bite, Edmund suspected something was after her, and she quickly made her way to the beach. Now let’s pick up the 10News report:

After looking at the pictures Edmund took, one shark expert told 10News the puncture wounds came from a baby Great White shark. The expert said the shark was about 5- to 6-feet long next to Edmund, who is 5 feet 3 inches tall. . .The expert said Edmund’s bright-green toenail polish might have triggered the attack.”The water was clear enough that the sun could hit my nail polish and reflect it, and so he (the expert) says the first bite was thinking it was a fish and it realized it didn’t want me then I wasn’t leaving the area and then it got aggressive because maybe that’s it’s area to hunt,” said Edmund.

How about the possibility that Edmund’s feet and legs were moving, and made her look alive, i.e. edible? I’ll buy the part about a young shark trying to establish hunting territory and being aggressive about it (younger predators can be overly or clumsily aggressive because their place in the species’ local hierarchy is still very risky).

Of course, this all assumes that the “expert” got the bite-mark ID correct, which might also be doubtful. The shark could possibly have been of a species other than a great white, because the doobie-rolling expert didn’t examine Edmunds directly, and saw photos of her wounds only. Bull sharks, the species responsible for the most human attacks, go as far north as Baja, and easily farther. Or maybe a tiger shark?

Let’s go with the great white, for entertainment purposes, as apparently 10News.com did, too.

Years ago, shark experts talked about something they dubbed “yum-yum yellow” — the yellow-colored parts of many scuba-diving wetsuits that experts theorized might be an attractant to big sharks such as great whites. This theory was later debunked entirely.

How big could this woman’s toes be? Her toenails might be the size of a dime. So you’ve got a large predatory fish that hunts by scent and vibration while visually seeking moving profiles of the proper kind (seal and fish profiles, mainly). Even in very clear water on a bright, sunny day, the idea that a hunting great white was “triggered” to attack because it somehow spied little dots of bright green on fast-moving dainty feet is absurd. This is a big beast looking for a moving profile in the water, and to an inexperienced shark Edmund fit the bill.

I’m always willing to entertain a far-out theory, and this one has some distance. The trouble is, people are reading it in a “news” story. And the shark ID was made from photos of the bites.

Posted by Horizon Charters Guadalupe Cage Diving at 9:47 AM No comments: