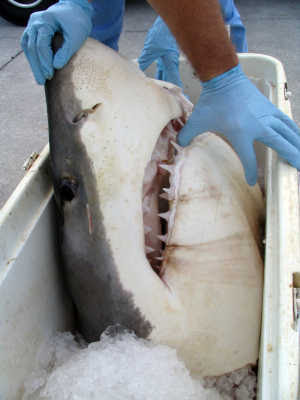 An international team of scientists, led by the Institute for Ocean Conservation Science at Stony Brook University, has used DNA to determine that groups of dusky sharks (Carcharhinus obscurus) and copper sharks (Carcharhinus brachyurus) living in different coastal regions across the globe are separate populations of each species. Both are large apex predators that are heavily exploited for the shark fin trade, which claims tens of millions of animals every year to produce the Asian delicacy, shark fin soup.

Many of these species are declining as a result of this fishing pressure for their fins.

DNA research projects were conducted by a collaborative international team of scientists from the United States, Australia, South America, Asia, New Zealand and southern Africa. The scientists collectively analyzed part of the mitochondrial DNA in nearly 400 sharks sampled from all over the globe.

This research was funded by The Pew Charitable Trusts through a grant to the Institute for Ocean Conservation Science at Stony Brook University. Sequence data were collected in the Field Museum's Pritzker Laboratory for Molecular Systematics and Evolution, operated with support from the Pritzker Foundation. Additional sequence data were collected at the Guy Harvey Research Institute with operational funds and a grant from the Save Our Seas Foundation. Funding was also provided by the Turner Fellowship Program and the Tinker Foundation.

For more information on "Phylogeography of the copper shark (Carcharhinus brachyurus) in the southern hemisphere: implications for the conservation of a coastal apex predator," visit here.

Posted by Horizon Charters Guadalupe Cage Diving at 8:21 AM No comments: