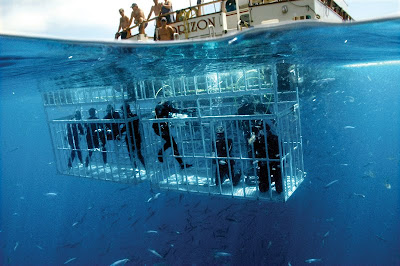 Scottish whisky liqueur Drambuie is rewarding 13 of its loyal bartenders by throwing them to the sharks – literally.

In the spirit of adventure that embodies Drambuie and its brand values of ‘risk, rebellion, passion and mystery’, they offered bartenders across the country the opportunity to win a trip cage-diving with sharks off the coast of Port Lincoln, South Australia.

The three winning venues - Rambutan in Sydney, Madame Brussels in Melbourne and the Forrest Centre Tavern in Perth – are currently at the Neptune Islands (70km off the coast of Port Lincoln) redeeming their prize.

“This promotion is similar to one they run in the UK, where bartenders are taken to Cape Town [South Africa] to experience the adventure-of-a-lifetime shark-diving,” said Drambuie senior brand manager Alison Sinclair. “It’s really exciting how well the bartenders have embraced the competition and the spirit.”

With an estimated wild population of close to 500 animals the birth of a Grey Nurse shark in Australia this week was a huge event. Attended by an aquarium diver from Australia's UnderWater World the exceptionally rare birth was also caught on tape.

When it comes to Save Our Seas few NGO's strike as many positive chords for shark conservation media output as they do. We have been blogging about their continuing media efforts for a while now as the "conservation gold standard."

So it is with little surprise that we discover another media hit, this time featuring some of the least voices heard in the shark conservation discussion. Mostly due to the fact that in their world shark conservation speaks with the language of data sets and power point presentations.

Here in their own voices, none less passionate, are the shark researchers who are on the front lines of shark conservation worldwide.

After watching this video you have to wonder out loud how Discovery Networks failed as badly as they did with Shark Week 2009. Making compelling shark media is not rocket science, as we have been saying for a while it starts by "engaging the source," not arriving on scene with a hand made shark script fabricated in Los Angeles.

Kudos to all those who made this wonderful video, we could use many more:

Thanks Mike in Beqa for posting this first!
Posted by Horizon Charters Guadalupe Cage Diving at 4:42 PM 2 comments: 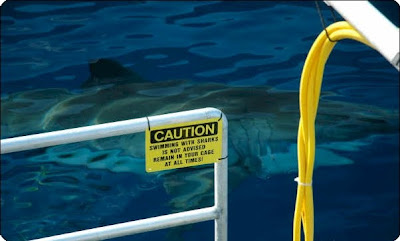 In the ongoing political mess that has become Isla Guadalupe Mexican Navy officials have, for the first time, demanded that a vessel to return to Ensenada in the middle of it's shark operations.

The issue, a ban on all chumming, brought about by a video shot in 2008 is back on the table in full force (thank you Mr.Patrick Walsh).

We'll update you as soon as the details have become clearer, suffice to say this latest development is not a positive one for this newly minted Bio Sphere Reserve or the commercial shark diving industry at large.
Posted by Horizon Charters Guadalupe Cage Diving at 2:50 PM 2 comments:

We received the following email this morning. 1900+ blog posts later about sharks, shark diving and conservation, it would seem this blog has discovered a wider audience.

Thanks to all our readers, shark divers, and associated industry cranks (you know who you are) we could not have done it without you:

Your readers have submitted and voted for your blog at The Daily Reviewer. We compiled an exclusive list of the Top 100 scuba Blogs, and we are glad to let you know that your blog was included!

Congratulations to another Miami area marina who has gone Shark Free. This week was an exciting one for the Shark Free Marinas Initiative as marinas from as far away as Puerto Rico joined the effort.

Leadership begins with taking a stand and making a phone call. Kudos to all our Regional Ambassadors who made the call and used our online materials to ask marinas to make that change.

Please support Keystone Point Marina by dropping by their facility at 1950 N.E. 135th Street, North Miami, Florida 33181 and be sure to visit their website at www.keystonepointmarina.com