Sharks and the Global Supply of Oxygen?

It started as a throwaway conservation quote a few years ago.

Completely devoid of any facts, empirical data, or even common sense, it has since snowballed into shark conservations most enduring media quote.

Much to the chagrin of serious shark conservation folks who would rather it go away - forever.

We're talking about the great non debate of Sharks and Oxygen, you know the one:

"If we lose the worlds sharks, we will run out of oxygen!"

The phrase was first uttered in it's most simplistic form back in 2008 during the promotion of the film Sharkwater (go to timeline 3.13). It has since taken on a life of it's own among those who trade in rumor, hysteria, and Facebook tribal gatherings where facts, common sense, and the twisted logic of gasbagging conservation statements are rarely considered.

But consider them we must, because the playing field for shark conservation has changed dramatically since the early days of 2008 and now we have an actual movement on hand, one that is being eyed at by big fishing interests and politicians.

It's a conservation nexus where words matter and facts even more so.

I would like to propose that we do away with or retire this poor excuse for a media quote:

"If we lose the worlds sharks, we will run out of oxygen!"

Perhaps to be replaced with something a bit more tidy?

Sadly, the gulf between those who are relevant in the shark conservation movement, those who get things done vs the loony fringe who cling to outdated media quotes seemingly designed and crafted by the Paul Watson School of Media WTF!? is growing on a daily basis.

Adopting a straight and universal media narrative for sharks is not only important, it is imperative, if the movement is to stay relevant and frisky into 2013 and beyond.

Labels: sharks and oxygen, the world of shark media, wtf with a side of wtf

About Sanctuary: The Last Stand for Sharks
This film portrays the underwater world of sharks and paints a global picture of the threats they are facing worldwide. Globally shark populations are declining, but there is growing momentum to protect sharks. Many locations are recognizing that sharks are worth more alive than dead, contributing both to the economy and the stability of crucial marine ecosystems like coral reefs. Some countries have even established shark sanctuaries throughout the entirety of their waters.

A shark sanctuary is a place where sharks can live and reproduce without the threat of fishing. Since many shark species are migratory, the establishment of small protected areas or breeding closures is not enough to protect sharks that may leave the boundary of safety. Shark sanctuaries present an opportunity to protect sharks over a larger scale before it is too late.

About the Pew Environment Group
The Pew Environment Group is the conservation arm of The Pew Charitable Trusts, a nongovernmental organization that works globally to establish pragmatic, science-based policies that protect our oceans, preserve our wildlands, and promote clean energy. For information, visit http://www.pewenvironment.org/.

Registration is required for this event. Use the link below to register. Please RSVP by Friday, January 27, 2012.

The Pew Charitable Trusts makes every effort to comply with federal, state and local government ethics rules when hosting events. Please make sure that your participation is consistent with applicable ethics rules.
Posted by Horizon Charters Guadalupe Cage Diving at 9:54 AM No comments: 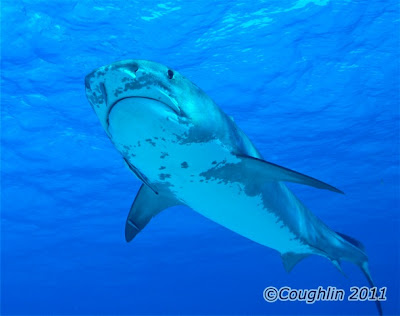 Co-Direct of Sustainable Tourism Research and Development at Curtin University, Professor Carlsen is working on an interactive site which would post warning and then sent out that information by email.
Currently, around 100 people have signed up to both send and receive information about shark movements.

"I feel that if I had had some knowledge about the presence of the shark I would have exercised more caution before going into the water."

Do people have information, wonders Professor Carlsen, "particularly whether they're are able to tap into local knowledge and any local sightings".

At the moment, the site is in development, he says. The next stage is to prove the concept.
"We're looking for surfers to sign up to sharkwatch.info. I'm pleased to say we've just hit 100."
The site needs to be interactive and to get the message out in the most effective way explains Professor Carlsen. "At this stage, we're looking at email alerts.

"Further down the track, we could be doing all sorts of things like SMS alerts and dedicated web pages and links to popular sites that surfers use such as Coastal Watch and Sea Breeze and so on"
When the site is operation, people will be able to report a shark sighting and to have that sighting confirmed by others. Professor Carlsen is also hoping to provide maps to specify locations.

"Anyone that signed up and has nominated that beach as one of their local beaches will get an email alert about the sighting.