Remembering "The Summer of the Shark"-Colbert Style

Colbert and the Daily Show pretty much nailed this one. Of course others have gone for the classic Coconut and Shark shtick, but no one does it better than Colbert and crew.

This bit was shot in Colberts pre-hair helmet days, sit back and enjoy:

Thanks to Jeremiah for sending this one our way, nicely done mate!
Posted by Horizon Charters Guadalupe Cage Diving at 10:51 PM 1 comment:

We got a request from the National Aquarium in Baltimore this afternoon to introduce you "our shark blog fans" to their new aquarium blog.

Covering all things "ocean" from their new dolphin baby they have on the way to sustainable blue crab harvesting in the bay. We liked the clean layout and in depth writing style and who doesn't absolutely love blue crabs?

The answer after a quick look was yes, yes they do.
Posted by Horizon Charters Guadalupe Cage Diving at 3:23 PM No comments: 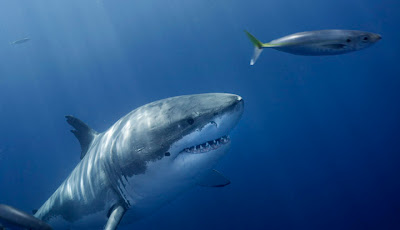 If there's one thing that we fail to understand here at Underwater Thrills are the new media savvy individuals in our industry who are attempting to re-categorize pretty straightforward shark events.

When sharks attack people, vessels, man made objects, or anything that is not primary or secondary food sources these new media folks rush in and quickly brand the event as a "shark mistake".

Tragically, sometimes these "mistakes" end the lives of the "victims", a term we're pretty sure will be soon be changed to UPP's or "unwilling predatory participants".

This current school of thought goes as far as stating "if the shark fails to actually remove a part of its victim, then what you have is a "shark mistake". For the sake of reality, let's get back to basics here and recognize that sharks are first and foremost predators. In the same category as bears, wolves, tigers and crocodiles.

Yes, we know sharks are not actively hunting humans.

To suggest that sharks make "mistakes", is to suggest an intelligence far higher then they have been tested for. It is also done to lower the threshold for interactions with these animals. These animals do occasionally attack, they are predatory. Divers seeking encounters with them should first and foremost understand this and move away away from the notion of a "shark mistake". Encounters with these animals should always have safety as the foremost consideration.

99.9% of all commercial encounters with these animals are safe. That's an amazing statistic all things considered. One that proves sharks are for the most part uninterested in humans. But when they occasionally attack, they attack. Plain and simple.

Oh, and by the way-there was a "shark mistake" off Catalina last week involving a Kayak and a white shark. As far as we can tell from reports this latest "mistake" had enough power behind it to completely toss the unwitting kayaker out of her kayak.

Fortunately, she did not become a "unwilling predatory participant" and swam safely to shore.
Posted by Horizon Charters Guadalupe Cage Diving at 9:29 AM 3 comments:

Depressing news from the Divemaster site this morning. The truth is some dive sites still have robust populations of these critters left, unfortunately almost nothing is known about these long range ocean travelers.

The research team has linked the increase in longline fishing for tuna with the decrease in numbers of oceanic whitetips and silky sharks in the Gulf of Mexico. Often a by-catch of longline fishing boats, theses sharks have been landed for their valuable fins to supply the increasing demand for shark fin soup.

Bite-Back, the UK’s fastest growing shark and marine conservation organisation, is working to expose the correlation between the demand for shark meat and fins and the decimation of shark populations and encourage a significant fall in consumer and retail demand.

Currently 270,000 sharks are killed worldwide everyday to keep up with consumer demand.

Graham Buckingham, campaign director at Bite-Back, said: “Except for the oceans, there is no other place on earth where the decimation of an entire species would be allowed to go unchallenged. It is our opinion that restaurants and retailers that sell shark meat and fins are effectively endorsing the extinction of these creatures. It has to stop.”

Last year alone 3,290 tonnes of shark meat and fins were consumed in the UK. Yet, since there is little hope for government intervention, Bite-Back says it is down to the diving community and principled consumers to educate and encourage offending retailers to stop selling shark and vulnerable species.

Posted by Horizon Charters Guadalupe Cage Diving at 9:19 AM No comments: