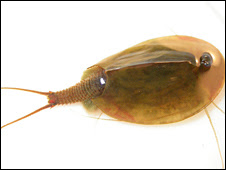 220 million year old shrimp "invasions" remind us that "modern humans" have only been on the planet for a paltry 80,000 years or so....oh and these critters are tasty too!

Specimens of the tadpole shrimp date back to at least 220 million years ago. It is now almost extinct in the UK but recent heavy downpours have seen the creature flourish at the Caerlaverock reserve in Dumfries and Galloway.

Wildfowl and Wetlands Trust researcher Larry Griffin said that three-times the average rainfall for August created "ideal conditions" for the species. The creature had been thought to be extinct in Scotland until it was found at Caerlaverock on the Solway Firth four years ago. Mr Griffin, who spotted the tiny species in the same location in 2004, was "very excited" to see it return.

Enough is enough. It's high time someone put a stop to the wild world of "Cryptophiles" and the media reports of even wilder critters spotted by these crazed believers in the unknown.

We hate to point this out but the following are myths and do not exist:

Try and tell this to these guys who have recently come up with this simply stunning image of...a cloud:

A group of filmmakers claim to have successfully captured Sweden’s legendary Great Lake Sea Monster (Storsjöodjuret), which is said to lurk in the waters of the Storsjön outside Östersund in northern Sweden.
Posted by Horizon Charters Guadalupe Cage Diving at 3:26 PM No comments:

SharkDivers.com: Consulting on the future of shark eco-tourism

Editors Note: From the RTSea Blog, what can we say Richard? When you're lucky enough to have talent like yours available on 10 digit speed dial-the future is very bright indeed:

"The times, they are a-changing." There seems to be a subtle but growing shift in strategy among many conservation organizations. In the face of past regulations/prohibitions or designated protected areas for endangered animals that have often proven less successful due to lack of resources for effective enforcement, greater attention is being turned towards eco-tourism as a means of increasing public support and providing a more attractive economic model for government and commercial entities to endorse.

I am on the consulting team of Shark Divers providing consulting expertise for shark tourism and the film/television industry. As a marketing communications and media production professional, I look forward to the opportunity to advance the cause of responsible shark eco-tourism as a means of providing effective support to shark conservation.

As new strategies emerge, there will be challenges to address - ecological impact, potential behavioral changes, shifts in third world economies, tourist/diver impact, safety issues for both people and animals, and more. But shark tourism - carefully planned - holds great promise. It can generate enlightenment in people, preserve marine ecosystems that depend on their predators as vital members of the aquatic community, and it can provide economic proof that a living shark is infinitely more valuable than a dead one.
Posted by Horizon Charters Guadalupe Cage Diving at 2:58 PM No comments: 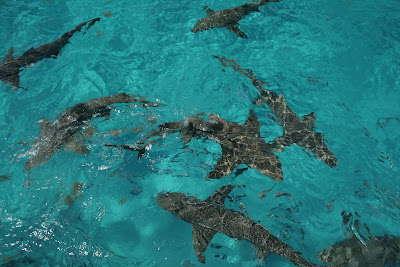 One of the strongest "winds of change" in the world of commercial shark diving has been the support and recognition of well respected NGO's for sustainable shark diving.

These "winds" have also been re-casting the image of the shark while highlighting the ongoing global slaughter.

What started as a whisper a few years ago in the lone pines of NGO forest has become a well rehearsed and continuing tornadic "Op-Ed of Pressure" to educate the public to the reality of sharks beyond the Jaws Mythos and foster commercial shark diving as a viable bridge solution to sustainable shark management.

Here's the latest example from Suzannah Evans from Oceana.org:

Every summer, familiar headlines creep into the news: stories of sharks terrorizing beaches around the world, sending swimmers racing for shore with the ominous display of a dorsal fin.

The shark's reputation as a killer was sealed in the public imagination with the 1975 release of Jaws, a movie with imagery so powerful that the original book's author devoted the rest of his life to dismantling the character he had helped create. The shark in Jaws was a brutal, instinctive killer with a dozen rows of jagged teeth and a taste for human flesh. The bloodthirsty great white has become an archetype so pervasive that even a news story reporting on a harmless two-foot sand shark can't resist recalling the Jaws mythos.