How many times do we have to put up with those idiots, diving outside the cages at Guadalupe. It seems like every week there is another article, glorifying that illegal activity. The latest installment of "look at me, I'm so cool" comes from "Fins Attached", a non profit out of Colorado, that is supposedly into shark conservation.

In a piece on channel 13 in Colorado Springs, their founder, Dr. Alex Antoniou is quoted as saying
"An ambush predator by nature, researchers have found simple eye contact keeps the massive predators at bay. “As long as you stand your ground and maintain eye contact you’ll see it coming toward us and it’ll just veer off,” Dr. Alex Antoniou, founder of Fins Attached, said."

I guess the good Dr. is still new enough to think he's got the great white sharks figured out. What could go wrong?! But let's assume for a second that the guy is right. Can you tell me, how the guy in the video below is maintaining that eye contact?


This is just another idiotic attempt at self promotion. These guys don't care that their actions endanger every other shark diving operator and in turn the sharks themselves. When someone is finally going to get hurt or worse, everyone might get shut down. If that happens, I doubt that the poachers will stay away for long and who's going to look out for the sharks and make sure, their fins do stay attached.

If you want to contact "Fins attached" and let them know, how you feel, you can contact them here.

At Shark Diver we believe that only "safe and sane" diving with sharks can help conservation. These illegal activities are simply publicity stunts and do more harm than good.

Why can't we accept these awesome White Sharks for what they are? They are predators, not harmless pets.

Viewing them from a cage is legal, safe and you get plenty close to the sharks. 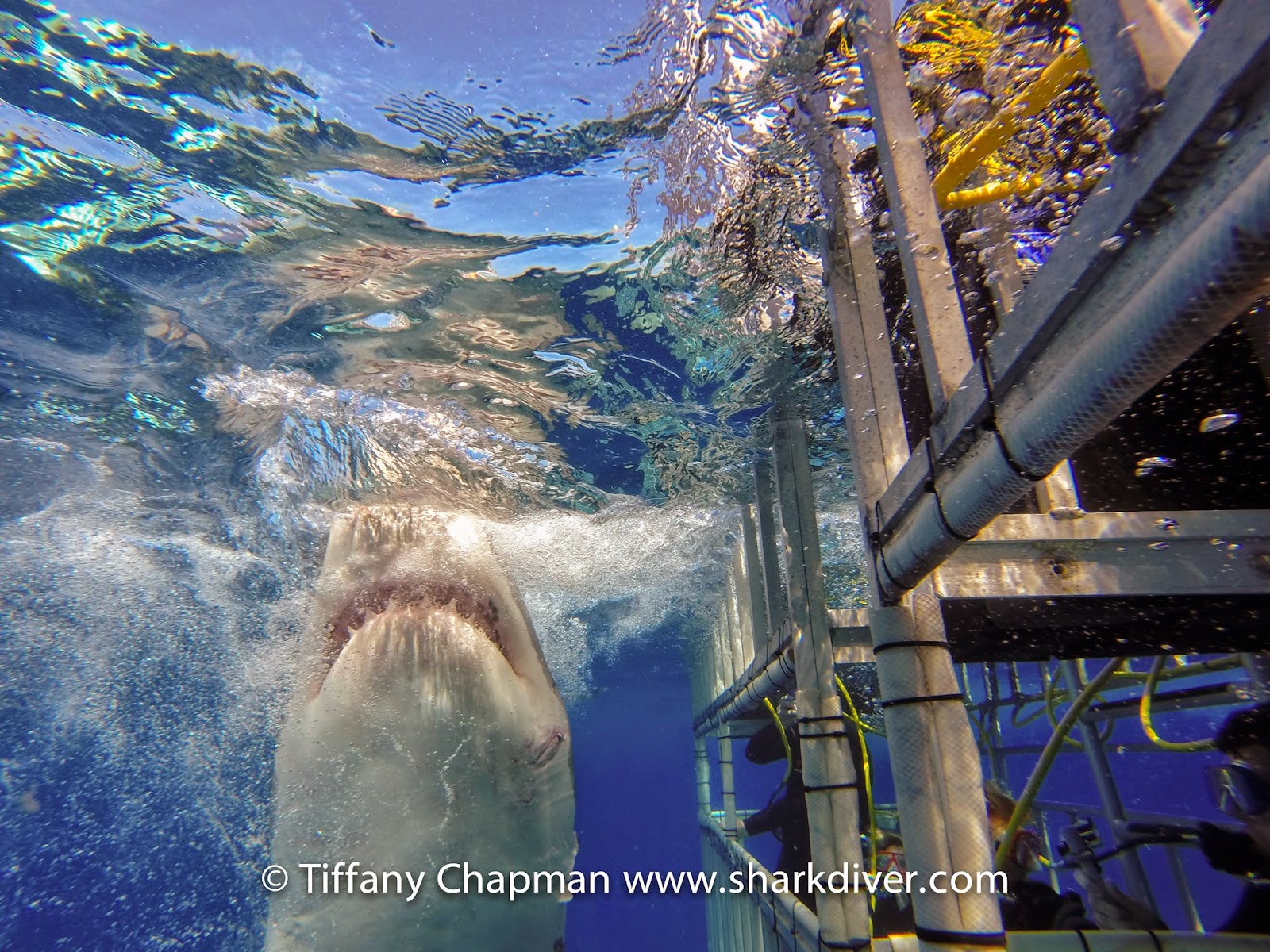 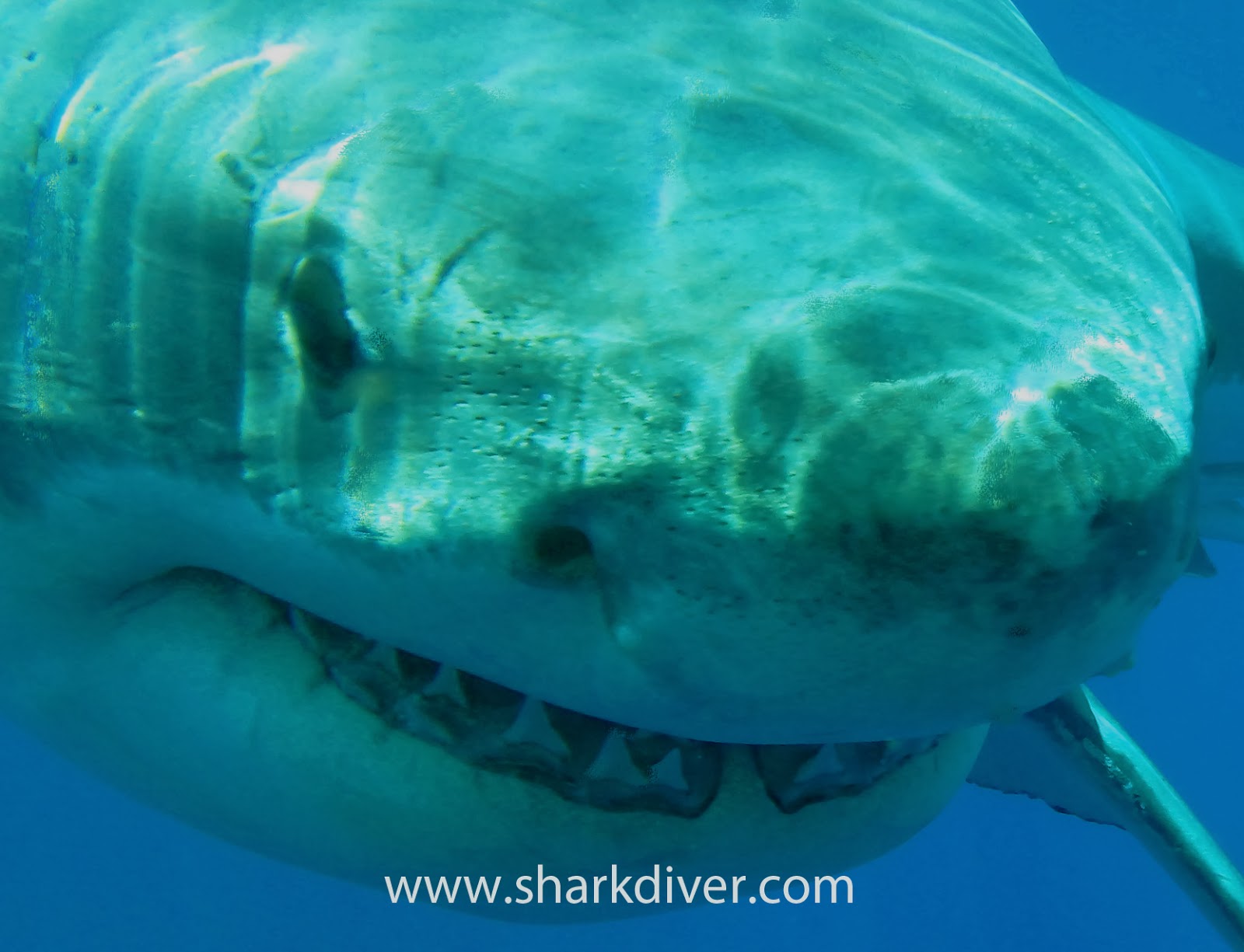 Close enough? They swim right by the cages and look you in the eye. No need to go outside the cage and endanger everyone.

About Shark Diver. As a global leader in commercial shark diving and conservation initiatives Shark Diver has spent the past decade engaged for sharks around the world. Our blog highlights all aspects of both of these dynamic and shifting worlds. You can reach us directly at staff@sharkdiver.com.
Posted by Shark Diver at 3:41 PM 1 comment:

When it comes to sharks, the news coverage is pretty atrocious. It seems like they either portray the sharks as mindless killers, or harmless pets. The people that get coverage, are invariably doing something stupid, or flat illegal.

An example of the stupid kind is the latest report by the "Mail Online". They are posting an article that features a diver taking "selfies" while leaning way out of a cage, while diving with great white sharks at Isla Guadalupe. 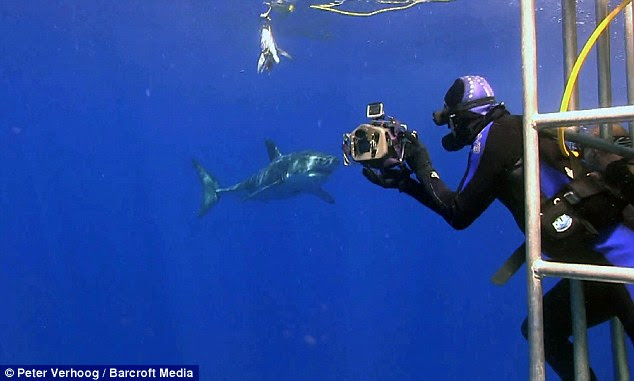 This picture reminds me of a professional photographer that was leaning out of a cage, filming a shark and never realized that a second shark was coming at him, with his mouth open. If it wasn't for another diver smashing his camera against the sharks nose, it would have taken the photographers head off. After the dive, the photographer didn't believe that there was a shark behind him and to this day, doesn't believe that he was within inches of being bit.

It is not the shark that you see that will get you, it's the one you never know is there.


For the diver in this picture to make a statement like: 'I began making selfies with all kinds of sharks – mostly for fun. 'Only later I realized that they could show people what sharks are like – when behaving normally, there is no danger.

Yep, you want to show people what sharks are like by taking a "selfie". You could not possibly achieve this by filming the sharks and show, how they behave. Nope, you have to get yourself into that picture to accomplish that.  Trying to get your 15 minutes of fame had absolutely nothing to do with it. Newsflash, while it is true that we are not on their menu, great white sharks are NOT harmless, specially when you are in a baited situation.


The full article is here.

I don't understand why people who say they love sharks, feel the need to portray them as something they are not. Are those people somehow ashamed that great white sharks are apex predators and not harmless pets.

If you want to come face to face with a great white shark and believe in doing is "safe and sane", give us a call at 619.887.4275 or email staff@sharkdiver.com.

We are looking forward to showing you these awesome sharks from inside a cage.

About Shark Diver. As a global leader in commercial shark diving and conservation initiatives Shark Diver has spent the past decade engaged for sharks around the world. Our blog highlights all aspects of both of these dynamic and shifting worlds. You can reach us directly at staff@sharkdiver.com.
Posted by Shark Diver at 11:57 AM 1 comment: