Last week we blogged about a developing story out of the Bahamas involving the crew of the Gulf Stream Eagle and a mysterious overturned vessel surrounded by Tiger sharks.

We contacted owner/captain Mark Rose in Florida to get the back story. The story he told us was too grim to blog about then, but now the story can be told. It's one of desperation and high seas drama unfolding in the dead of night off the coast of the Bahamas last week.

Documentary-Island of The Great White Shark

The critically acclaimed new white shark documentary Island of the Great White Shark just released another online teaser for your review. It will be featured at the Harvard Museum of Natural Science in July with filmmaker Richard Theiss:

Island of The Great White Shark-Documentary
Uploaded by sharkdiver68
Posted by Horizon Charters Guadalupe Cage Diving at 9:16 AM 2 comments:

Stopping Shark Finning-It Starts With "One" 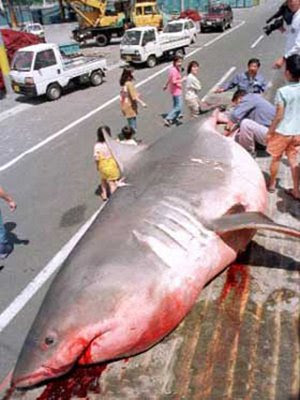 One boat, one fisherman, one website, one blog, one resort in Asia.

Today another big hotel chain made a bold decision not to serve sharks fin soup to it's patrons-reserving a limited use for high rollers.

Resorts World Asia has set also aside a continuing $70,000 USD budget for shark research and launched a Marine Conservation Fund.

It starts with "One".

According to a recent survey carried out by Singapore's Environment Council and US-based conservation group Wild-Aid, 70 million sharks are killed each year to meet the demand for shark's fin, resulting in a reduction in the number of sharks by as much as 90 percent over the last 20 years.

However, the popularity of shark's fin soup among customers often means that most restaurants cannot afford to drop the dish from their menus. Louis Ng, executive director, Animal Concerns Research & Education Society (ACRES), said: "In the past, if you didn't serve shark's fin at your wedding dinner, others would term you as cheapskate."

To support conservation efforts, one of Singapore's upcoming integrated resorts - Resorts World at Sentosa - said it would not be offering shark's fin on its menu when it opens in 2010. It does not, however, rule out exceptions.

Krist Boo, Resorts World at Sentosa, said: "In the private gaming rooms, if a high roller asks for shark's fin, we will serve it and that's a business decision." Together with its move to keep shark's fin off its menus, the resort has also launched a Marine Life Fund as part of its corporate social responsibility programme.

Posted by Horizon Charters Guadalupe Cage Diving at 8:32 AM 2 comments: