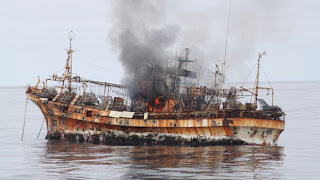 50 sharks. That's all it took for a Hong Kong fishing company to receive the following from the Marshall Islands who recently declared all of their waters a Shark Sanctuary:

3. Permanent banning from the Marshall Islands

A long line fishing boat has been fined 120,000 US dollars and banned from fishing in Marshall Islands water for violating the country’s ban on shark finning.

The Marine Resources Authority Director Glen Joseph says the shark fins and skins confiscated from the vessel that fished under the aegis of the Marshall Islands Fishing Venture will be publicly burned in the near future.

Marshall Islands Fishing Venture is part of the Hong Kong-based Luen Thai Enterprises, which operates long line fishing operations in Majuro and other parts of Micronesia to export sashimi to markets in Japan and the United States.

Shark fins and skins from an estimated 50 sharks were discovered on board the long liner during a regional fisheries surveillance enforcement program in February.

Mr Joseph says they will not relicense the vessel to fish in Marshall Islands waters.

He says the message they want to get out to anyone operating in Marshall Islands waters is that they are serious (about the shark ban), and it is the law.

Meanwhile, Marshall Islands Fishing Venture manager Derrick Wang says it regrets the actions taken by the captain of this particular vessel, and appropriate actions have been taken to ensure future incidents with this vessel and other vessels under of it will not happen.

About Shark Diver. As a global leader in commercial shark diving and conservation initiatives Shark Diver has spent the past decade engaged for sharks around the world. Our blog highlights all aspects of both of these dynamic and shifting worlds. You can reach us directly at sharkcrew@gmail.com.
Posted by Horizon Charters Guadalupe Cage Diving at 7:32 AM No comments: