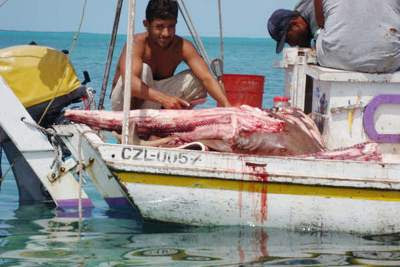 When local sharks are killed in any region it is usually the commercial shark diving industry that discovers and records the event.

These "events" have happened at a number of well known shark sites from South Africa to the Bahamas recently.

This week it was Belize and a gruesome story of local fishermen pitted against a dive and shark dive industry who are in a struggle for the regions sharks. One time use vs sustainable tourism:

Scandalous photographs of the slaughter of nurse sharks have sent shock waves through Belize. Mating nurse sharks nesting in the shallow waters along the shores of Caye Caulker were being filleted in a sailboat, as well as, on board two motorized boats which were resting on the Caribbean waters.

Caye Caulker tour guide James Rosado from Belize Diving Services saw the Corozal licensed sailboat with what, according to him, appeared to be dolphin carcasses on their boats. Closer looks revealed that what was actually being cut up were nurse sharks. The sailboat was accompanied by two twenty five foot Mexican skiffs, one having a sixty horse powered engine while the other had a forty horse powered engine. These power boats contained what appeared to be gill nets (Gill-nets entangle fish. The nets are comprised of panels of multifilament- or monofilament panels with a stretched mesh size that capture fish by either lodging behind their gill-covers or by entangling their spines) behind them.

Editors Note: Kudos to James Rosado from Belize Diving Services for breaking this story. If there's anything we can do to help please do not hesitate to ask. The way to effect change in Belize is to "bang the drum" and you folks are doing a good job.
Posted by Horizon Charters Guadalupe Cage Diving at 8:10 PM No comments:

Carnival of the Blue - Bigger than a Breadbox 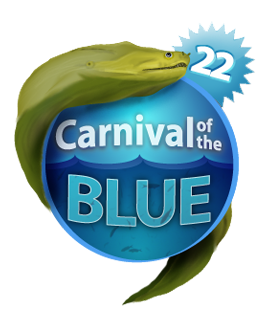 And twice as fun. For the past two years Mark Powell over at the Blogfish blog has been accumulating a monthly meeting of the best "Blue Blog" submissions. The results each month are very entertaining:

Welcome one and all to the twenty-second installment of this monthly meeting of ocean mirth we call the Carnival of the Blue. For nearly two years now, bloggers world-wide have rallied to fill this monthly compendium with their favorite writings on ocean science, conservation, natural history, art, photography, history, critical analysis, and much more.

Read this months Carnival members and no we're not in this months COB since we failed to submit anything. The end of the month comes up on you kinda quick, you know?

Apparently being written up in this months Playboy magazine does not qualify one to be in the COB;)
Posted by Horizon Charters Guadalupe Cage Diving at 2:18 PM 2 comments:

Labels: best blogs, carnival of the blue, shark diver blog is not in here, why are we not in here

Call us when you get something this cool to look at. Seriously, the surf guys come up with compelling, eye catching, You Tube sending, classic media at a rate that defies imagination.

And our side, which is filled with some of the brightest underwater shooters and still photographers in the industry - has put out a total of six, maybe seven, "pro shark" media hits in the past five years. This blog post is about quality shark media, not Microsoft powered quickies.

So, if you want to know how it is done here is, once again, another amazing surf video:

Posted by Horizon Charters Guadalupe Cage Diving at 11:03 AM No comments: 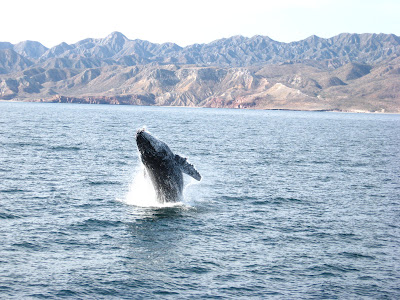 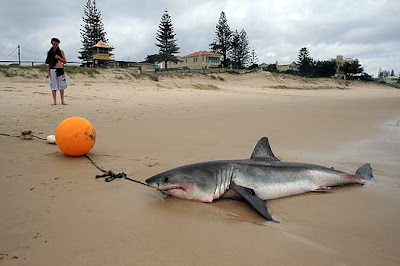 The Australian media are having what amounts to an "orgastic anti shark field day" with a spate of recent high profile shark attacks.

One lone voice, Professor Iain Suthers, has popped up in a local op ed with a novel idea.

Of course no one would consider a tagging program for shark populations at the cost of $2K per tag and an overall $500,000 for the final conclusions - when a shark program like this (see image) would do the immediate job much faster. Or would they? Ideas can be very dangerous things:

We don't know if it is due to the fish bait abundance, caused by recent strong upwelling. With the strengthening East Australian Current and warming of the Tasman Sea, perhaps this is a climate-related process we could model. We don't even know the life history of bull sharks - are they just summer tourists, and if so, where do they winter? At present all such speculation needs data, and the only long-term data is the controversial shark-meshing program.

First, data could be sourced from reliable observers of the harbour and beaches: ferry captains, charter fishing operators and experienced observers from high-rise apartments. They could dial in an observed index from 0 to 9 which, with other data (water temperature, rainfall, upwelling), could form the basis of a weekly shark risk, similar to UV risk.

Second, we need more research and communication. The bad reputation of hammerheads and grey nurse sharks has no basis. Many researchers around Australia are tracking sharks with acoustic tags. The presence of tagged sharks will be tracked with 900 receivers distributed around Australia as part of the Federal Government's integrated marine observing system. One part of that array has just been deployed off Tamarama. Science is needed so we can enjoy the harbour without fear.

Editors Note: Kudos to Professor Iain Suthers for this "idea".
Posted by Horizon Charters Guadalupe Cage Diving at 6:59 AM No comments: