Branchinella latzi, missing from Ayers Rock since the 1970's, now scientists think they have an answer to this decades old mystery...and the answers are not pretty.
TOURISTS may have killed off a rare species of shrimp by relieving themselves on Australia's iconic Uluru, or Ayers Rock, according to a report.

Biologist Brian Timms said his research had showed one species of small inland shrimp living in pools atop the monolith had become extinct while another had thrived.

”The people going up the rock somehow have affected the animals which live in the pools, possibly by peeing on the rock and pooing on the rock,” Timms told state radio.

The Branchinella latzi species had not been seen on Uluru since the 1970s, and would have been susceptible to “enrichment” of the pool's water, he added.

”Certainly if (tourists) go up, they should be behaving themselves, not pooing on the rock,” Timms said.

However, a species of fairy shrimp had survived, probably because it was “widespread and tough”, according to Timms.

Australia is mulling a ban on tourists climbing the rock, which is a sacred part of Aboriginal tribes' creation mythology.

Tour operators claim visitors are often caught short on the arduous climb, and most had a “toilet roll tucked away” in case of emergency.

Posted by Horizon Charters Guadalupe Cage Diving at 8:05 AM No comments: 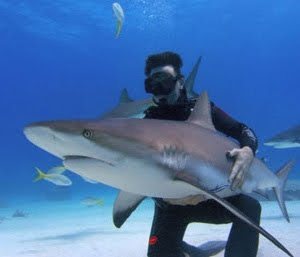 Thanks to their “tough guy” appearance, substantial size, and cute, adorable flippers, sharks have long been considered one of the most “huggable” animals of the sea. Indeed, who among us hasn’t ever thought about wrapping our arms around the warm, inviting cartilage of a Great White shark after a bad day at work or unsuccessful treasure hunt at the bottom of the sea?

But could those shark hugs be causing more damage than good? Potentially. A new study conducted by researchers at the University of California-Riverside suggests that hugging sharks may be hazardous to your health.

In the study, participants were dropped into the Pacific Ocean and asked to embrace a shark for a “full 90 seconds.” Surprisingly, 99 percent of the participants reported serious side effects following their hugs. These side effects included long, jagged flesh wounds, lost limbs and, in severe cases, even death.

In order to entice the sharks into showing up and receiving their hugs, scientists asked each participant in the group to wear a warm, fuzzy sweater. Also, a necklace composed of bloody fish chum.

To eliminate bias and provide a point for comparison, a control group of participants was asked to hug a stuffed placebo shark located in the break room of the UC-Riverside science lab. In sharp contrast, only one participant in this group was injured, and even that was chalked up to external variables (he slipped on a grape).

In order to verify the results of the experiment, the research team repeated the study several times over. Each time, the results were similarly dismal.

Now that the team has identified a potential link between shark hugs and health risks, the next step is to figure out the actual root cause. Of the many possibilities identified by the team, Dr. Pete Talborn, lead researcher for the study, has a “sneaking suspicion” that it “has something to do with radioactive plutonium injected into the sharks by communist Russia.”

Other potential, though less likely causes suggested by the team include flesh-eating bacteria, alien mind control, and “poisonous jellyfish disguised in shark costumes.”

Until further research is conducted, experts suggest that people refrain from hugging any and all types of sharks. However, they do note that the study only tested full-on two-armed hugs. As such, side hugs and one-armed lean-in hugs may not be harmful.