Bahamas Shark Sanctuary - Betting on a Sure Thing? 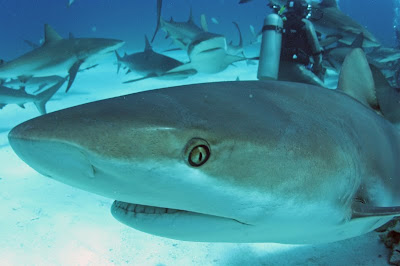 There's quite a conservation push in the Bahamas going on right now, and if we were betting folks, we might give this enterprise a 99% success probability.

The effort is to make most, if not all of the Bahamas a Shark Sanctuary.

If successful a Bahamian Shark Sanctuary would be an unprecedented achievement in the region and would likely cause other Caribbean nations to follow suit - eventually.

The effort has some big NGO names behind it like Matt Rand from Pew Trusts, the Bahamas National Trust, Guy Harvey Foundation, and more encouragingly several of the mainstream commercial shark diving operations in the Bahamas who are at the center of a $78 million dollar a year shark tourism and film and television empire.

The Bahamas, currently reeling from the worst tourism economy in the past 60 years and looking over the horizon at a new and open Cuba, would be wise to move in the direction of broad based conservation initiatives.

Once Cuba opens up, and all indications show that will happen in the next five years, tourism development will leave the Bahamas for the next 20 years. That giant sucking sound Bahamians hear will be the millions of development dollars flowing out of the U.S. and back into Cuba.

The timing for a greener, park based Bahamas, will be the ultimate tourism hedge against Cuba's regional ascension.

A Shark Sanctuary would start the process of reinventing and re-branding the Bahamas in a way that will take an emerging Cuba decades to catch up. Which is why we think that, ultimately, the Bahamian government in Nassau will in fact create their first comprehensive Shark Sanctuary, because at the end of the day, it's all about touri$m.

Image by Christy Fisher.
Posted by Horizon Charters Guadalupe Cage Diving at 10:17 AM No comments: